Manuel Pellegrini looks for a payback for Sunday’s gamble 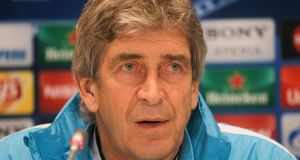 Manchester City coach Manuel Pellegrini: “We have important challenges from now until the end of the year.” Photograph: Efrem Kukatsky/AP

As Manuel Pellegrini attempts to lead Manchester City into the Champions League quarter-finals for the first time he has been forced to deny Pep Guardiola’s status as the club’s next manager is a problem.

City have lost three consecutive matches since the Spaniard was confirmed as Pellegrini’s successor.

Before the clash against Dynamo Kiev at the Olimpiyskiy Stadium in the last-16 first leg Pellegrini insisted he and his players were not affected by the announcement about Guardiola. Yet after City won their first game following Guardiola’s confirmation as the next manager, they suffered defeats to Leicester, Tottenham and Chelsea.

“No, really, that is not a problem,” the manager said in answer to a question . “All the players from the start, they are just thinking in this season that we have important challenges from now until the end of the year, and the best way is to be focused in every game.

“Now it is Champions League, after that we have the Capital One Cup final at Wembley on Sunday, and on Wednesday we will return to the Premier League [at Liverpool]. So it’s very easy because we are focused on having a season that works this year.”

“But this is absolutely different, we are now thinking of trying to improve, because in the last two years we have arrived in the last 16 for the first time. Now we have won the group and we will try to continue, knowing that we have a difficult game here.”

Kyiv have had a Uefa stadium ban for racist behaviour and crowd disturbances reduced to one game, allowing fans to attend tonight’s match. Pellegrini is hopeful that those supporters who committed the racist offences have learned a lesson and that the game will go ahead in the correct circumstances.

“One of the worst things you can do is play in an empty stadium without fans,” he said. “In this case, fans of Kyiv have a lesson about what happened. . . I hope in this case it will be a lesson for these fans and we have a normal game.”

Yaya Toure, Samir Nasri, Aleksandar Kolarov, Gael Clichy, Vincent Kompany and Pablo Zabaleta are among the established players who face uncertain futures when Guardiola arrives. Zabaleta is the third-longest-serving player at the club, behind Joe Hart and Kompany, and he knows this could be a last chance to claim the one trophy City still crave.

“Now is a chance to make a step forward,” he said. “We know this club is making a lot of effort to bring in top players. We know we are 100 per cent focused on what is a big chance for us to continue in the tournament. We need to perform well and see if we can get a result.

“We know we’ve been playing against the best teams in Europe. In the last four years we’ve been learning a lot about the way you must play in these games. We played the best team in the world at this stage for the last two years [Barcelona] . I’m not going to say that this is going to be easy - they have the mentality to play in these types of games as they’ve played in this competition before many times. The only way to do this is to perform well and then finish it at the Etihad.”

Kyiv last played a competitive match almost two months ago but during their winter break Serhiy Rebrov’s team have appeared in 13 friendlies.

Zabaleta said: “They’ve had a long break and the chance to have a good rest. We’ve played a lot of games in January and February but I think we will see [City] players who’ve had a rest last weekend. Physically and mentally we must be fresh and play at 100 per cent.

“It’s a different game. Hopefully we can perform well enough to get the result.” Guardian Service