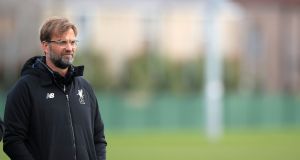 Jürgen Klopp has told Liverpool their pursuit of a sixth European Cup rests on performing with bravery against the best team in Europe in Manchester City and the best manager in the world in Pep Guardiola.

Liverpool host the Premier League champions-elect in the first leg of the Champions League quarter-final on Wednesday night, with their manager calling for a repeat of the performance that produced a 4-3 win over Guardiola’s team in January.

City have not won at Anfield since May 2003 – their only success in the last 30 visits – but Klopp believes Liverpool could not have drawn a tougher opponent than their domestic rivals.

“I know much more about City than I do about Barcelona or Real Madrid or Bayern Munich this year because I watch them more often this season, and for me they play the best season of all these teams,” the Liverpool manager said. “They are the best team in Europe at the moment, and so that makes it quite difficult.

Klopp admitted it was difficult to be brave against a City team who can “run through you like a warm knife through butter”.

His definition of brave football, he elaborated, is: “To use the spaces, although it is much easier to say that. Go in the challenge. Be there, don’t wait. Be lively. It’s a lot of things, really.

“Everything we do with the ball can cause City problems. Sitting back is not a solution. It is not solution against Manchester City. That is how it is. Be there where there is a chance to get the ball. If we can we do that, we have a chance. If not? It is very, very difficult.”

No other manager has beaten a Guardiola team more than Klopp, who has won six of his 12 meetings with the former Barcelona and Bayern Munich coach. The Liverpool manager claimed before arguably their most important meeting yet: “I have really no idea why I have that record. I really respect him a lot. I really think he is the best manager in the world, and I have no problem to respect that; again it means he is doing a fantastic job.”