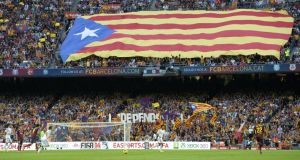 Barcelona president Josep Maria Bartomeu suggested that there is a political campaign against the club over its prominent role in Catalan nationalism. Photograph: Lluis Gene/AFP

Barcelona president Josep Maria Bartomeu insinuated that bitter enemies Real Madrid had a part to play in the Neymar transfer court case in which he has been called to give evidence.

“We have done nothing wrong and we will keep saying the truth. The signing of Neymar took place using the most prestigious lawyers,” Bartomeu told Spanish television.

“Other clubs wanted to sign Neymar paying more money but they didn’t manage it and they didn’t like that. Someone now has overstepped the line.

“I’m not saying Madrid are behind this but Neymar’s father told me that there were two offers: Barca and Madrid. Madrid wanted to buy him and were ready to pay more for him.

Bartomeu also suggested that there is a political campaign against the club over its prominent role in Catalan nationalism.

“A year ago we allowed the Camp Nou to be used for the Liberty Concert, we play with the colours of the Senyera (the Catalan flag) ... maybe that isn’t liked,” he said.

“I can see a sport and politics issue but we are going to keep going as we are and reach the end which is my role. We are paying a political price.”

Bartomeu will be questioned on February 13th over whether Barcelona and their directors defrauded the Spanish tax office of €2.8 million during the 2014 tax year.

Barcelona initially claimed that the cost of the Neymar transfer from Santos ahead of last season was €57.1 million but the case was taken to court by a fan seeking transparency over the deal.

Former president Sandro Rosell resigned in January, 2014, after a judge decided to investigate and call him to testify.

Bartomeu, having replaced Rosell, gave a breakdown of the cost of the Neymar transfer which revealed that it amounted to €86.2 million with the inclusion of payments to the player and his family.

Judge Pablo Ruz feels there is sufficient argument to investigate a claim that tax was not paid on an outstanding installment of the transfer that took place at the start of Bartomeu’s presidency in January last year.

Bartomeu’s pending court appearance is the latest incident in a troubled year for him at the helm of the club.

The boardroom crisis in the aftermath of a transfer ban for two windows over the signing of foreign under-18 players led him to bring forward presidential elections to the end of this season.

1 Farrell and O’Connell provide insight into changes in Ireland’s analysis
2 Andrew Porter diary: Meat, veg and intermittent fasting the order of the day
3 Anfield and Cheltenham show sports again lacking in looking after their own
4 Aidan O’Shea sees both sides of the equation when it comes to professionalism
5 Louise Galvin’s rugby career on hold for work on the frontline
Real news has value SUBSCRIBE
Crossword Get access to over 6,000 interactive crosswords