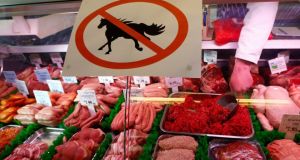 A butcher works behind a “no horsemeat” sign in Market Harborough, central England. Photograph: Reuters

Many people were annoyed that “the Paddies” uncovered the horse meat scandal that turned out to be a case of massive international food fraud, Ray Ellard, consumer production director of the Food Safety Authority of Ireland said yesterday. He said it was felt, particularly in Britain, that the authority was acting on information, but it was just doing its job.

“There was a massive international food fraud going on and Ireland found it and that’s annoyed a lot of people, that the Paddies found it,” he said. “I’m sorry to say that, but that’s the truth of it.”

Mr Ellard was addressing a Royal College of Physicians conference on public health yesterday, as news emerged of arrests in the Netherlands in connection with the horse meat scandal.

The head of a meat trading company and a former colleague were arrested for their alleged involvement in the false labelling of meat products. Prosecutors said the Dutch company had processed 300 tonnes of horse meat from suppliers in the Netherlands, Ireland and Britain between 2011 and 2012 but the meat was falsely identified in the company’s records as beef. Mr Ellard said the Irish authority had used its common sense when it decided to test the authenticity of beef products. “You follow the money – where could someone make some money? – and see if there’s an opportunity for someone to do something illegal.”

The authority tested salami, burgers and ready meals. “If you had asked us beforehand to guess where we might find some traces of horse, we would have said salami because typically salamis in continental Europe use horse meat,” he said. “We tested salami. We didn’t find any horse there.”

The Food Safety Authority handled 772 media queries in the first two months of the crisis and he said the issue was still featuring in Twitter feeds every day. Mr Ellard and the Food Safety Authority’s chief executive, Prof Alan Reilly, recently encountered hostile questioning from MPs when they met the Westminster committee on the environment, food and rural affairs. MPs repeatedly insisted that the Food Safety Authority was acting on a tip-off when it tested for horse meat and were critical of the fact that no one has yet been prosecuted for their role in the horse meat scandal. Prof Reilly said he was shocked and dismayed at the aggressive nature of the questioning and the political point-scoring. He said it was a case of “blame the Irish” for uncovering the fraud.