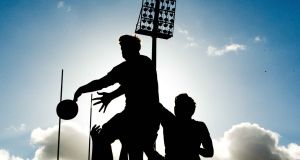 Fears of a legal quagmire prevent us knowing with certainty if Irish schools rugby has a doping problem. Photograph: Morgan Treacy/Inpho

In 2017 Sport Ireland chief executive John Treacy placed rugby in a high-risk category of potential doping offenders along with cycling and athletics.

“Schools rugby is not currently within Sport Ireland’s jurisdiction,” said a spokesperson. “Based on evidence in other countries, schools rugby could be a potential risk area.”

“The Irish rugby environment is probably the most stringent in terms of drug testing and that has always been the case,” said Browne.

Except in schools, where that has never been the case.

Browne stated that future recruitment of convicted dopers is unlikely and that he was unaware of Grobler’s history until after the one-season deal was inked.

One player, following an eight-month process, was reprimanded for a doping violation that was declared a naive error of judgment by a young man.

An Ulster player was cleared by an IRFU tribunal while an Ireland international, following a Five Nations match, received no sanction from an independent tribunal.

It’s true, South Africa is a very different rugby environment. In 2016 they sought to implement a testing programme for anabolic steroids in state schools.

The main tributary into the Irish professional game has never permitted similar investigation.

“The problem is governance,” explained Prof Brendan Buckley of Sport Ireland’s anti-doping committee back in 2013. “The IRFU doesn’t govern schools rugby and even though they facilitate schools competitions, they don’t own them. We are working to get around that problem at the moment, and it is fundamental to the whole issue of consent . . . Schools are essentially a law unto themselves.”

Prof Buckley, asked every other year since, has been unable to update these quotes.

“I’m sure there isn’t a teenager playing a contact sport in Ireland, which requires strength and endurance, that hasn’t been tempted to take stuff.”

Fears of a legal quagmire prevent us knowing with certainty if Irish schools rugby has a doping problem.

“We don’t want to commit an assault on [a teenager] by insisting that they provide a urine or blood sample to us,” Buckley explained. “It is a two-part process: parental consent in most and assent by the students.”

Nonetheless, Browne confidently highlighted the effectiveness of the IRFU anti-doping system this week.

“We have a targeted programme,” he said. “We particularly target players coming up through the system so all of our provincial academy squads are targeted.

“We now have five people involved full-time in the ‘Spirit’ programme . . . one in each of the provinces, and then Anne Marie Hughes who co-ordinates.”

The IRFU are the only governing body in Ireland who pay for extra tests.

Still, neither Hughes nor Dr Una May, Sport Ireland’s anti-doping chief, are allowed anywhere near the sacred cow.

New Zealand rugby recently moved to test schoolboys at the semi-final stage of national competition as it falls under the jurisdiction of the NZRU, so they do not require parental consent.

So, unlike South Africa Rugby, whose CEO Jurie Roux stated in a 2016 letter to headmasters that steroid abuse exists in their school system, Dr May cannot definitively state that Irish rugby does not have a doping problem.

“The evidence is there in South Africa in their schoolboy rugby,” said Dr May. “I couldn’t say there is a problem in other countries at schoolboy level without evidence.”

UK Anti-Doping also faces consent issues unless a player is “bound to the RFU” via an official academy system.

“Supplements are definitely the biggest problem we have in Ireland,” said Dr May. “If the opportunity arose we would enter into an arrangement of testing in the schools, but at this moment in time we don’t have jurisdiction. It would be my preference for them to be part of the system. That is a matter for rugby to solve.”

Dr May concedes that change can only come from parents.

“It’s important that parents recognise what sport is about and that they provide the necessary support for the right reasons and that young players are not exposed to unnecessary risks.

“The winning at all costs concept is something we would feel very strongly against in Sport Ireland.”

As soon as teenagers enter the provincial representative squads, at under-18, they can be tested.

Sport Ireland also makes regular visits to Carton House, when the senior Ireland squad are in camp, and specific players are repeatedly tested.

“We pay close attention to how players are performing. If someone is coming back from an injury we would feel they are particularly vulnerable because there are times in people’s careers where the risks are greater. The testing after games is randomly selected but we do target players when we go to training. That is not a random process.”

“We keep a constant eye on what’s going on, for anything unusual, we look at social media and we have a confidential hotline, all to see if there are any issues arising around individuals.

“We work off their biological passport as every athlete that gets tested now has a steroid profile.”

If a convicted doper comes into Irish sport can he or she expect to be tested?

“I wouldn’t say we will be standing outside their front door on a regular basis, necessarily. All players should expect to be tested at any possible time.”