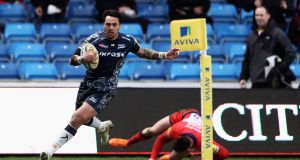 Denny Solomona has been charged by the English Rugby Football Union after allegedly aiming homophobic abuse at a Worcester player during an incident in Sale’s victory over the Warriors last weekend.

The Worcester outhalf Jamie Shillcock could be heard making a complaint of homophobic abuse by a Sale player, soon after a scuffle with Solomona in the 56th minute of the match, and the England wing will now face a disciplinary hearing next Thursday. Solomona faces a charge of “conduct prejudicial to the interests of the union or the game”, following what the RFU has described as “alleged verbal abuse”.

Shillcock made the allegation to the referee, Andrew Jackson, and while he did not appear to identify the opponent in question, he said: “He said it three times. He made a homophobic slur twice.” Jackson replied to Shillcock and the acting Sale captain Jono Ross that he did not hear any remarks but that any allegation would be dealt with after the match.

Any ban may jeopardise Solomona’s hopes of being part of England’s tour of South Africa in June – not least after he was warned over his future conduct by Eddie Jones having been sent home in disgrace from a pre-season training camp following a late-night drinking session with Manu Tuilagi.

Verbal abuse of an opponent about their religion, colour, sexual orientation, national or ethnic origin carries a ban of between six and 18 weeks. The nature of the charge however, which falls under the RFU rule 5.12, means the disciplinary panel may use punitive measures outside of those sanctions.

“In the weekend’s Premiership match between Sale Sharks and Worcester Warriors, Solomona allegedly verbally abused a Worcester Warriors player,” read an RFU statement. “The incident occurred in the second half of the match.”

In January, the Toulon and France centre Mathieu Bastareaud was banned for three weeks – reduced from six in mitigation – for verbally abusing Benetton’s Sebastian Negri in a Champions Cup match. Bastareaud was picked up by television footage calling his opponent a “f**king faggot”. – Guardian service