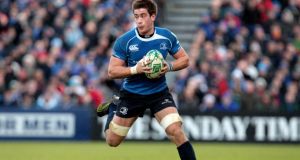 Biarritz may be next week’s work but Leinster see a little of the French outfit in this week’s opposition, Italian side Zebre. They may not have won a Pro12 match this season – zero from 25 – but the way the Italians go about trying to win with their pack may have some value for the Amlin semi-final.

If there is one aspect of their play that they will get right it’s the aggression and the use of their pack to exploit set pieces and in the contact area. It’s a must win game for Joe Schmidt and one that should not cause Leinster real anxiety.

But facing the grunt in the north of Italy also has some fringe benefits.

“It is quite a good warm-up game, because we know Biarritz are massive, set-piece orientated and they try and bully you up front and in the scrum,” says Leinster flanker Dominic Ryan. “So, this is a perfect way to build for that.

“They try to bully people, pick and go, pick and go around the corner. They tend to play off nine and 10 a lot, they do have pace out wide but, in particular, they play the game in the forwards and we’ll be ready for that.

“There will be 20,000 people there, their players will be emotionally charged and there is potential that, if we go over there and are not in the right frame of mind, we could potentially lose.”

Italian Spring
This week Leinster has been preparing for Italy in a different way from a regular match in these islands. With the ground expected to be firmer and the heat also a factor, players have been old school about facing into an Italian Spring.

Ryan has had his share of injuries this season but he holds a glass half full attitude with the changes taking place in Leinster making it as much the beginning of a new era as the end of an old one. With change comes opportunity and it’s the players’ challenge to embrace that. They have been particularly diligent in preparing this week.

“The lads have been coming in early in the morning at 6 or 7am to the gym and pump all the heaters on, not opening the windows so that we can get used to the 25 degree heat,” he says. “I know when we went over there two years ago, it was 26 degrees and it really hit us hard and we struggled, winning 17-11 in a tight game.

“A lot of the lads suffered from dehydration that day, so we’re trying to get used to it by hydrating early in the morning, doing urine tests to check hydration before and after sessions and things like that.”

Yesterday was sunny and 25 degrees in Reggio Emilia and Stadio del Tricolore but the weekend forecast is for rain and lower temperatures.

No matter, if it helps for Biarritz and Leinster’s opportunity to play in their first Amlin final, then molto bene to that.