Scarlets withstand Connacht’s late advances to come out on top 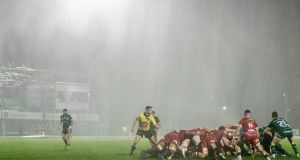 Connacht and Scarlets contest a scrum in the heavy rain during their Pro14 clash. Photo: James Crombie/Inpho

Connacht will be kicking themselves after delivering an error-ridden performance that played into the hands of the visiting Scarlets who took the Pro14 points at the Galway Sportsground.

It was a frustrating evening for Andy Friend’s side who, with two games in hand, had the opportunity to leapfrog their opponents, but instead they failed to produce a clinically efficient performance that was good enough to win.

In a scrappy and messy game, punctuated by torrential downpours which were mitigating factors, the Welsh visitors had the upper hand at the breakdown, and produced two sweeping attacks worthy of the victory.

“Really disappointing,” said Connacht coach Andy Friend. “We did not show up in the first 40 minutes. We were better in the second, but we just weren’t clinical enough. You can’t give the Scarlets 40 minutes to warm up.”

The visitors struck first in the seventh minute, capitalising on a penalty to touch to launch an attack from left to right before winger Ryan Conbeer crossed in the corner for an unconverted try.

However, Connacht, after three weeks inaction due to postponed fixtures, overcame a shaky start to produce their first sustained attack following a superb scrum penalty from debutante Conor Kenny. Hooker Shane Delahunt continued his good form and, coupled with some strong surges from captain Jarrad Butler, No 8 Abraham Papali’i forced his way over for his debut try, with Jack Carty adding the extras for a 7-5 lead.

However, Connacht then struggled to gain foothold in their opponent’s half, turning over possession too easily and failing to deal with the Scarlets’ kicking game. Although the lineouts were messy for both sides, Scarlets again stretched Connacht’s defence out wide with Conbeer bagging his second try. When experienced Welsh international prop Rob Evans forced a scrum penalty, Jones added the three points for a six point lead at the break 7-13.

A strong direct run from Paul Boyle was the brief highlight of the opening five minutes before Scarlets struck again, capitalising on an attempted chip to gain possession, with Johnny McNicolas providing scrumhalf Dane Blacker who finished off for a 20-7 lead.

Thereafter Connacht did everything they could to gain control, initiated by John Porch scorching through the defence. Superb scrambling from Conbeer forced him into touch before Scarlets were let off the hook again when Connacht knocked on with the line in sight. It was then third time unlucky when Matt Healy lost the ball on the line.

Connacht continued to build scoring platforms. Paul Boyle looked to have broken through but was held up before finally Ultan Dillane touched down from a forward drive and Carty’s conversion closed the gap to 14-20. But that was as good as it got for Connacht after being denied another try at the death.