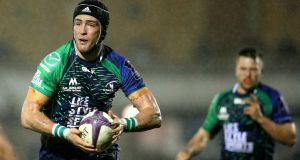 Dave McSharry in action for Connacht before he retired this summer. Photograph: James Crombie/Inpho

It is likely the IRFU will soon face legal action from a player who has been forced to retire because of concussion, according to medical and management sources active in Irish rugby.

Professional players in Ireland, some of whom are in their mid-20s, are increasingly faced with a career choice because of the fraught relationship between concussion and the insurance industry.

“Someone soon will get pissed off and sue the IRFU, and after that happens for the first time, others will follow,” said an Irish agent who manages a number of international players.

The problem is that insurance companies are reluctant to pay out if a player has had more than one concussion as the definition of the injury from an insurance company point of view then changes from a career-ending once-off injury to a repetitive injury.

There are currently young Irish players faced with the decision on whether to play on after one concussion and risk missing an insurance payout if they incur any more concussions that ends their career.

Their other option is to step away from the game after one concussion and take the insurance money to which they are entitled.

“I am aware of a guy who is in his mid-20s who may or may not make it at provincial level here or in the professional game in England. He has had one concussion and he is asking himself now if the best thing for him to do is take the money and not play on,” said the agent.

“If there is €300k tax-free, enough maybe to set up in something else, why would he risk playing on? You can’t ask a player to play on and risk more concussion when it is 70 per cent to 80 per cent likely that the insurance company won’t pay up. Why bother taking the risk?”

The situation is forcing players, who have suffered a first concussion, to make an insurance claim when, from a medical point of view, they may not need to do so.

Attitudes are changing. Those players who continued to play and whose careers have ended because of concussion are now thinking of other options for financial recourse.

In that respect, the employers, who have a duty of care to employees, are coming into range.

Cillian Willis, who is suing Sale Sharks, has already begun that trend in the UK.

In Ireland there are a number of players waiting to see how insurance companies treat their career-ending concussion injuries, including Connacht centre Dave McSharry, who retired over the summer, Ulster’s Declan Fitzpatrick, who retired in April 2015 and Leinster’s Kevin McLaughlin, who also retired last year. There has been no resolution so far.

“If insurance doesn’t pay out, then who will players sue?” says a doctor with close links to the sport. “That’s a no-brainer. It’s their employers and those people whose care they were under when they played the game. The sport has left itself wide open here.

“Most concussion comes from the tackle. Rugby has succeeded in depowering the scrum and reducing spinal injuries. In the NFL they stopped head- on-head tackles. Law changes can be real game-breakers, and decrease the number and severity of injuries. Rugby has not succeeded in mitigating against concussion in tackles.”

The IRFU also find that they are in an invidious position as their insurance premiums continue to soar. While they hope players who have served them well during their careers receive adequate compensation, they also know they will have to pay for it.

The bigger and more frequent the payouts to players who have had to stop playing because of concussion, the bigger the IRFU premiums become.

“Not having an insurance policy or the insurance companies not paying out amounts to the same thing.”