Failure to turn possession and pressure into points proves costly 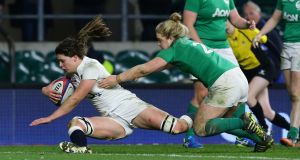 The lesson remains as salient as ever; setting up camp at the water’s edge that is the England try-line must yield five points if victory is to be snatched away from this vast and unforgiving Twickenham pitch.

That’s what Ireland did achieve, the camp, just not the points, for a crucial period in and around the hour mark. It became a moment when nothing short of a try was acceptable as England were reduced to 14 players when Harriet Millar-Mills was sin-binned for repeated infringement at the breakdown.

England were hanging on, at home, but they did just that for long enough to make Ireland pay for the lack of ruthlessness.

It initially looked like the world champions would steamroll the Six Nations holders when Emma Croker profited from a driving maul for the first try after 21 minutes. Amber Reed missed the conversion but had already posted a penalty for an 8-0 lead.

But, as per usual with this Ireland side, Niamh Briggs went about chipping away at the two-score lead with three penalties all coming off the industry of her pack, where Claire Molloy and Sophie Spence were outstanding.

Again, nothing new there.

Then came the precious period of territorial dominance which resulted in zero points.

That proved the deciding factor in this game as the Six Nations title almost certainly slipped out of Ireland’s grasp when Abbie Scott dived over for a second English try after 62 minutes.

Still only a four-point deficit, but it felt like more as Ireland struggled to find their way back towards the scoring zone. Or out of their own half. Tough, bruising night all round.