Women’s 6N: Ireland bounce back to topple Scots with ease 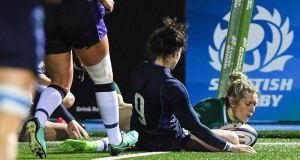 Ireland bounced back from last week’s heavy defeat at home to England to claim a deserved bonus-point win against Scotland at Scotstoun in a game they dominated in almost every aspect.

On a wet and windy evening in Glasgow, pack power was always likely to be the key factor in the match, and although the Scots’ scrum was strong enough for much of the match, the Irish forwards won the battle in the loose.

The visitors were on top right from the kick-off, and after opting to run a couple of penalties opened their account when Aoife McDermott crashed over for an unconverted try. The home side gradually got their game together after going behind, and drew level through Hannah Smith from a miss pass by Mhairi Grieve.

On a night when a combination of the swirling wind and heavy drizzle made handling difficult, both sides managed to put together some impressive handling moves.

Ireland had the better of the latter stages of the first half, and regained the lead with the clock in red when tighthead prop Leah Lyons forced her way over from close range after a penalty to touch had set up good position.

The second half began in the same way as the first, with the Irish exerting sustained pressure. A series of forward drives took them ever closer to the goal line, and with the Scots defence gathering centrally, the ball went out along the backs, allowing Alison Miller to finish off in the left corner.

Upping the tempo in the knowledge that a fourth try would kill off the contest as well as securing the bonus point, Ireland steadily wore Scotland down with a series of short drives and got that crucial score through Anna Caplice just before the hour mark. Nicole Fowley got the first successful conversion of the night, and the visitors were home if not exactly dry.

1 Monica Seles: The warrior queen who could have been the best ever
2 Valtteri Bottas takes Austrian Grand Prix as Lewis Hamilton is demoted to fourth
3 Donnacha O’Brien takes first Classic as Fancy Blue wins French Oaks
4 Eamon O’Shea: We spent quite a bit of time talking about older people rather than to them
5 Ferrari’s Charles Leclerc ‘will not take the knee’ before Austria GP
Real news has value SUBSCRIBE

Marcus Rashford ‘blessed’ to be fit again and back in the goals 17:57
Matheus Pereira inspires West Brom as they keep in touch with Leeds 17:44
West Ham edge closer to safety despite late Shelvey equaliser 16:50
Enable can’t reel in impressive Ghaiyyath at Sandown 17:01
Valtteri Bottas takes Austrian Grand Prix as Lewis Hamilton is demoted to fourth 16:22
Crossword Get access to over 6,000 interactive crosswords