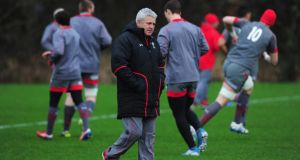 One word recurs when players and coaches talk about Warren Gatland and the key to his success: honesty. The New Zealander, whose coaching career has taken him from Galwegians, Connacht and Ireland to Wasps, Waikato and Wales, is not afraid of making big decisions, whether dropping an icon, Brian O’Driscoll, from the final Lions Test against Australia last summer or removing Ryan Jones as the Wales captain two years after winning the grand slam.

Both calls earned him considerable opprobrium and the battle-hardened Gatland admitted being shocked by the criticism he received after omitting O’Driscoll from the series decider.

“Warren went through a lot in that final week,” says Robert Howley, Gatland’s attack coach with Wales and the Lions, and a member of his Wasps side who won the Heineken Cup in 2004. “It is a testament to him the way he came out of it. Ask me the secret of his considerable success and I will say it is his honesty.”

Sustained success
Wales have won three Six Nations titles in six years under Gatland, although he was on a sabbatical last year, and they are seeking an unprecedented third successive crown.

Last month he signed a contract extension until the end of the 2019 World Cup, which, if he sees it out, will make him the longest-serving coach of a tier one nation in the professional era. “From the players’ points of view, it is superb that he is staying because he is a fantastic coach,” says the Wales and Lions centre, Jamie Roberts. “His staying means the special environment he has created will continue for another five years.”

The longer Gatland spends with Wales, the more accomplished they become, certainly in Europe.

There was a point, though, in 2010, after a poor Six Nations campaign, two wins out of five, followed by a home draw with Fiji and the demotion of Ryan Jones, when some questioned the WRU’s decision to offer Gatland a contract extension to 2015.

In a recent interview, Gatland said he sought to empower those around him. “It is about building trust and loyalty and being honest,” he said. “Those three values are incredibly important to me. It is not about having a dominating role. I want the other coaches to feel they have ownership and that means backing them even if you do not agree 100 per cent with a strategy. That is how you build trust, loyalty and honesty and I want to be challenged by those I work with, while challenging them as much as I can.”

Gatland also draws a line between work and recreation. “He has built a club environment where we are like a family,” says the flanker Dan Lydiate, who was allowed to return home to Paris this week for the birth of his daughter.

“We are all growing up together and while there is banter off the field – you cannot be serious all the time – the work on it is hard. Because Warren is honest, you know where you stand with him. He understands what works and his results speak for themselves.”
Guardian Service