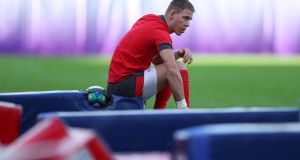 Liam Williams, seen here preparing for a Wales training session on Wednesday, has been ruled out of the Rugby World Cup semi-final against South Africa on Sunday according to the BBC. Photograph: Shaun Botterill/Getty Images

Wales fullback Liam Williams has been ruled out of Sunday’s Rugby World Cup semi-final against South Africa after sustaining an ankle injury, the BBC reported on Thursday.

The Saracens player, who has won 62 caps and started all of Wales’s World Cup games except one, is not expected to recover in time for their next match – either the final or third-place playoff.

Leigh Halfpenny is expected to replace the 28-year-old in the line-up against South Africa when Warren Gatland announces the team on Friday.

Wales are already without loose forward Josh Navidi, who injured his hamstring in their 20-19 quarter-final victory over France on Sunday, with winger Owen Lane called up as a replacement.

The Six Nations champions are also keeping a close watch on centre Jonathan Davies, who was ruled out of the quarter-final clash with a recurrence of a knee injury which he had aggravated in the penultimate pool game against Fiji.

South Africa also suffered a big blow ahead of the semi-final when winger Cheslin Kolbe was ruled out of the game with injury.