‘We’re not just a team that play fantasy rugby. We play down and dirty rugby too’ 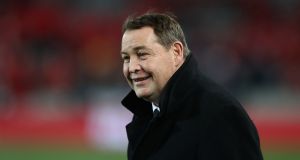 Steve Hansen: “I always find it amusing when people tell us they’re going to beat us up in the tight five,”. Photo: David Rogers/Getty Images

It’s an immutable truth that anyone who says “I don’t mean to brag” is about to do exactly that, just as the words “with the greatest respect” will surely be followed by anything but. Late on Saturday night Steve Hansen managed to use both, back-to-back, in his post-match press conference at Eden Park. Hansen was asked about his pack. He gave a good answer, spoke about how well they had played, and how their work was the foundation of everything his team had done.

Then he paused, thought, and added: “You don’t become the number one side for as long as we have been, with the greatest of respect, I don’t want to sound like I’m bragging here, but you don’t do that unless you have a very good tight five .”

When they score tries like that first one you sit there thinking: ‘Why aren’t you doing that more often?

Hansen looked like the dog who got away with stealing a chop from the kitchen counter. “I always find it amusing when people tell us they’re going to beat us up in the tight five,” he continued, “because we’re not just a team that play fantasy rugby. We play down and dirty rugby too. And,” he added, “I mean down and dirty in the most respectful way.”

The most respectful way would have been to not mention it at all. Hansen’s team had already made his point for him, overwhelmingly so, and they had done it, from the Lions’ point of view, in the most exhaustive, excruciating, detail. For the Lions, the first Test was one long lesson in how much better they needed to be. Hansen just couldn’t resist the temptation to provide one or two extra observations of his own, like an examiner providing notes to a student who has failed a test.

“When they score tries like that first one,” he said, talking about Sean O’Brien’s try after Liam Williams’ wonderful run from his own 22 , “you sit there thinking: ‘Why aren’t you doing that more often?’”

Hansen loves the Lions, and often says so. But not nearly so much as he loves beating them. One Sunday columnist, Mark Reason on Stuff.co.nz , said that a “smug blanket” had settled over New Zealand after their victory. And it’s true that, for a team who win so often, the All Blacks are not so very good at it. But then, Warren Gatland has thrown plenty of cheap shots of his own these past few weeks, saying that he thought Hansen was “a little bit worried” by “how good the Lions could be”, and complaining about the amount of illegal blocking “all the New Zealand teams” have been doing.

And more than any of that, it’s easy to imagine that Hansen was irritated by the suggestion this series is doubling up as Gatland’s extended audition to take over as New Zealand’s head coach when Hansen steps down. He has spent 13 years working with the All Blacks, after all, as assistant and then head coach. So you could say Gatland had asked for it. And there’s more coming. Because Hansen isn’t about to cut him any slack.

On Sunday morning he announced that he was releasing four members of his squad, Julian Savea, Jordie Barrett, Ngani Laumape and Vaea Fifita, to play for the Hurricanes in the Lions’ midweek game. The Hurricanes already had Nehe Milner-Skudder and Cory Jane in their ranks. Throw in Savea, who has a point to prove given that he’s playing for his place in the test team, and Barrett, one of the brightest young backs around right now, and they start to look a very formidable team indeed. The Lions are in for another fearsomely tough match.

“The reason we’re letting them play is because this only happens once every 12 years and it wouldn’t be fair on them not to allow them to play,” Hansen said. “It’s something we need to honour, the Lions; Lions tours are important. We don’t want to lose them.”

And if it just happens that, in honouring the Lions the All Blacks also make their lot that much harder, then so much the better. While Gatland tries to figure out how to balance the demands of that midweek match with the need to get his test team ready for the weekend, the only thing Hansen had to worry about was how he would deal with the injuries to Ben Smith, who is concussed, and Ryan Crotty, who has damaged a hamstring.

This was swiftly done. The All Blacks already had Jack Goodhue in their squad, so he stays on to cover Crotty, and then they have called up Damian McKenzie as cover for Smith. That settled, Hansen is free to start planning for the second test. “We hold the advantage,” he said. “They’ll have to chuck everything they’ve got at us to stay alive and we’ve got an opportunity to wrap it up. So it will be a massive game.”

And then he started to explain all the changes he expects Gatland to make to the Lions’ tactics, just to let everyone know that the All Blacks would be ready for whatever he comes up with. “I thought they were reasonably non-abrasive at the breakdown - they allowed us to get the ball we needed to get by not putting numbers in,” Hansen said. “They wanted to have people on their feet to be able to have a defensive line rather than attack us at the breakdown. Maybe they’ll look at changing that, so we’ll have to get better at the breakdown.”

He also felt that the Lions “had some genuine success moving the ball from the back, so we’ll have a look at that. They may look to do a little bit more of that. So we’ll have to sharpen up our ability to connect in the middle of the park and make our tackles.”

Hansen talks like a chess player who has already worked out his opponent’s moves. Listening to him, you could be forgiven for thinking his biggest problem may just be the manner in which he and his team will celebrate their victory.