Six Nations: Round Two team of the weekend 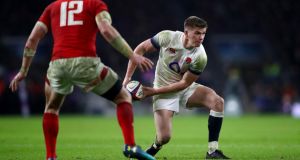 15 Matteo Minozzi
A rose among Italian thorns, the 21-year-old provided a refreshing verve an x-factor so many of his teammates sorely miss. Outpaced Ireland’s boy wonder, Jordan Larmour, for his try.

14 Keith Earls
The Munster wing didn’t put a foot wrong at the Aviva Stadium, his score putting him just three behind second-place Tommy Bowe on the all-time list. Imperious in the air and electric on the deck.

13 Huw Jones
Has the potential to provide Scotland with a genuine world class attacking outlet at outside centre. Ran a fantastic line for his try and always looked to have a break in him.

12 Owen Farrell
A real candidate for the best player in the world at the moment. England’s talisman kicked and ran well - showing brilliant vision for the first try - but it was his defensive work against Wales which stood out. Still tackles like he’s playing league, but it’s effective.

11 Jonny May
May had never scored a Six Nations try but he had two inside 20 minutes against Wales. His pace was nicely showcased by his first, which saw him win a foot race to touch down following Farrell’s cunning kick.

10 Johnny Sexton
He will have tougher assignments but this was another exemplary display from Ireland’s number 10. Things can only get better as his relationship with Bundee Aki at 12 blossoms.

9 Greig Laidlaw
Gregor Townsend’s decision to recall his veteran scrumhalf was more than vindicated as Laidlaw steered Scotland to victory over France. Brought an unerring calm to the madness at Murrayfield and knocked over 22 points to boot.

1 Mako Vunipola
An excellent performance from England’s loosehead, he lasted 76 minutes of a gruelling, attritional encounter. Made a mammoth 17 tackles and carried hard, 14 times.

2 Ken Owens
By far the standout hooker on the Twickenham pitch, Owens’ throw found it’s target on each of his 15 attempts - no mean feat given the ability of England’s jumpers. A dynamo in the loose and always willing to make the ugly carries.

3 Andrew Porter
Nobody expected Porter to be thrust into the limelight after a few minutes, and it was both pleasing and relieving to see how well he coped. 13 carries for 18-metres is an impressive return, and his performance softens the blow of Tadhg Furlong’s injury somewhat.

4 Joe Launchbury
A fine performance in which he did plenty of donkey work - making 17 tackles - as well as helping make May’s second try. His one handed offload around the back of two tacklers was a sublime touch of beauty amidst the brawn.

5 Alun Wyn Jones
Would have taken on England on his own if he had to. Wales showed remarkable grit and guts to hang on at Twickenham and nearly steal it - the belief stemming from their captain who was clearly targeted but remained unbowed.

6 Aaron Shingler
An ex-medium fast bowler for Glamorgan, Shingler surprised 80,000 people with a stunning show of express pace after pouncing on a loose ball in the second half. Wales couldn’t capitalise on that moment, but Shingler was everywhere throughout, making 16 carries and 17 tackles.

7 Sam Underhill
A half time introduction against Wales, Underhill’s contribution is summed up in one moment. Scott Williams looked destined to score in the left corner - judging his early dive for the whitewash just right - and he looked flummoxed after the Exeter flanker somehow managed to slide across and drag him into touch.

8 Chris Robshaw
Jack Conan looked set to deliver a fine performance when he was forced off injured at half time, so Robshaw gets the nod. He made 16 tackles and led the English pack well, ensuring they maintained their ferocious speed off the line.

Angling Notes: Small band of diehards make the most of Mask visit 00:00
Bryson DeChambeau powers his way to stunning US Open win 23:31
Leicester City go top of the table after putting four past Burnley 21:48
Kilcoo show their class to coast past Carryduff in Down final 21:24
Cuala sink stout-hearted Ballyboden in titanic championship battle 20:29
Crossword Get access to over 6,000 interactive crosswords