Six Nations 2015: Jeamie Deacon in at the deep end 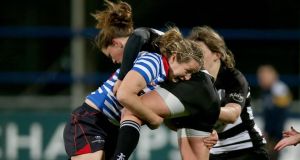 Jeamie Deacon in action for Blackrock.

She’s had her fair share of memorable moments during her sporting career to date, being flown by private jet to play in a hockey quarter-final for Michigan State University among the more unforgettable ones. But for Jeamie Deacon, being named in Ireland’s 2015 Six Nations squad, having only taken up rugby two years ago, is up there with the most memorable of all.

Before Ireland won the Grand Slam in 2013 she was barely aware rugby might be a sporting option for her. Hockey, which she had played since her school days in Newtown in Waterford, was her sole focus. And she experienced plenty of success, being capped at under-18 and under-21 level before earning a call-up to the senior Irish squad, and winning just about every trophy up for grabs with UCD.

But that Grand Slam campaign caught her imagination, and she decided to give rugby a go, joining Blackrock. Two years later and she’s on the verge of making her international debut alongside several of the players who inspired her to take up the game in the first place.

“Absolutely,” she laughs. “It’s crazy. Ah, just to be involved . . .. watching them over the summer in the World Cup, it was amazing what they did, what they’ve done for the sport in Ireland, the way they’ve got women’s sport out there – they’ve done so, so much. So, to be involved in that set-up, with that group of girls, is out of this world.”

Deacon is one of 12 uncapped players named in the 30-strong squad by new coach Tom Tierney. If it’s not quite a complete changing of the guard, it’s close enough with stalwarts like former captain Fiona Coghlan, Lynne Cantwell, Grace Davitt, Siobhán Fleming and Laura Guest all now retired.

Among the newcomers is New Zealander Sene Naoupu, who is married to the Connacht number eight George Naoupu, qualifying via residency having moved to Ireland in 2011, as well as Hannah Tyrrell, one of seven players who are also in the Sevens squad that will attempt to qualify for the 2016 Olympic Games this summer.

And Tyrrell, like Deacon, is one of a clutch of players attracted to rugby from other sports in the last year or so, the 24-year-old a former member of the Dublin Gaelic football team.

Aside from dabbling occasionally in tag rugby, Deacon, a 29-year-old Wexford native who is a mathematics teacher at Wesley College in Dublin, had little involvement in the game.

“But then, two years ago, I just decided to try it out so I went training once a week and played when I could. My main focus was still hockey with UCD, but then I said I’d give rugby my full attention for a year and see where it got me. I flew at it with Blackrock this season and we did pretty well, just kept getting better and better. All the coaching at Blackrock really helped me and I made good progress.”

“Of course it’s a very different game to hockey, but decision-making is key in both, and knowing when to pass and when not to. And a big thing in all team sports is the ability to see space, when you have to thread the ball through a gap. So, there’s that much in common, as well as the general fitness work you have to put in. But the challenge is to soak up all the rugby techniques, to work on your skills, there’s plenty of catching up to do on that front.”

Rugby techniques were far from Deacon’s mind back in 2007 when she went to Michigan State University on a hockey scholarship, and by the time her three years were up she was ranked seventh in their list of all-time goalscorers and had been named in the ‘Big Ten’ (their college league) team of the year.

“It was an amazing experience, the set-up in the US is just crazy – for instance, I got a private jet to a quarter-final game, that’s how seriously they take college sport, and how much they put in to it. The backing they give you is insane. They have everything, physio rooms, rehab stuff, a little pool you can do your rehab running in. They pay for everything, they just look after you really well. All you have to do is turn up for training, it makes it so much easier.”

Coming back home might have been more a sporting culture shock for Deacon, having got used to that level of comfort, had UCD not been her destination. “It would be one of the top places in Ireland to go and play sport because of the facilities they have; they’ve got a good structure in place for the high performance end of things, but elsewhere I’m not sure how much support there is.”

For now, though, hockey is on the backburner.

“Yeah, unfortunately, and I’m going to miss playing, but there’s just no way you can do both. You have to be full in, or not in at all, otherwise you only half do it – and it’s not worth it. I definitely miss the games on a Saturday, and with the Irish Hockey League expanded for next season I’ll miss those big matches, but I had to make a choice.”

With Tierney only having been appointed in December, and the squad on an extended break after last summer’s World Cup, the preparation time for this Six Nations campaign has been limited enough. Add in the loss of so much experience through retirements, as well as the absence of winger Ashleigh Baxter through injury, and the inclusion of so many players with no international experience at all, and it could be a testing enough time for the ‘new’ Ireland. Atl least their two toughest Six Nations fixtures – against England and France – are at home in Ashbourne.

Game one, though, is away to Italy on February 6th, and the prospect of making her debut, even as a replacement, exhilarates the goal-kicking centre.

“I’m getting chills even thinking about it,” she laughs. “Putting the green jersey on and playing a match at that level would be just unbelievable.”

She wouldn’t even need a private jet, she’d be walking on air.