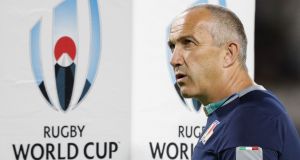 Conor O’Shea: “They [Ireland] have belief in that there is a benchmark, as these players have beaten New Zealand. But I think the All Blacks are an unbelievable rugby team.” Photograph: Adrian Dennis/AFP/Getty Images)

At the beginning of the end of Italy’s waylaid World Cup campaign, a South African journalist suggested trickery on behalf of their head coach.

“If it was any other coach I would say it was planned but because it was Conor and I know him, well, I say it was bad luck,” said the Springbok leader Rassie Erasmus when the reputation of the Italy coach was questioned.

Honesty and a phenomenal work rate doesn’t always deliver success but Italy’s tournament will forever be filed away in the Gubu category.

“I’m not sure what could have been done,” said Conor O’Shea of the natural disaster-enforced cancellation of the New Zealand game. “At least I made it out of Toyota to get up to see my wife [Alex] who was stranded in Tokyo. ”

No coach, not even one as meticulous as O’Shea, can plan for a typhoon that has so far killed 72 people, never mind key injuries to props and a “stupid” act of foul play destroying the internal belief that the Azzurri would shock the world.

Denied by the wrath of Hagibis, O’Shea’s three-year project never got a chance to prove as much.

“We wanted to finish on the pitch but that’s life,” O’Shea told the Irish Times before flying out of Tokyo on Monday evening. “The organisers did everything they possibly could.”

Still only 48, a long and fruitful career in sport awaits. But ahead of this weekend’s quarter-finals he might just be the best-placed person to run the rule over Ireland versus New Zealand and Japan against South Africa.

“The crackdown on the tackle laws has really helped Japan as it allows them offload more and more, and they are willing to take that risk,” he begins. “People cannot go for the ball as that risk is so severe, you get it slightly wrong and you are gone [via a red card].

“The whole world is watching. Every junior coach, every schools coach, so [this World Cup] has been the perfect way for people to re-educate themselves from club level up to European Cup level.

“If they refereed the offside line to the same degree that they are refereeing the tackle it would stop that other blight on the game. It is like disciplining a child; if you keep on doing it they will stop.

“It would certainly help Australia to play the way they must to beat England, ” O’Shea explained. “I’m not saying Ireland can’t play [an offloading game] but the weather this weekend will help them.”

“Ireland have the physicality and the defensive mindset to be able to challenge this All Black side. If the weather is iffy on Saturday, which it is due to be, it limits the amount of offloading.”

O’Shea settles into the ways Ireland can beat New Zealand for the third time in five meetings under the guidance of Joe Schmidt.

“Joe has arrived to the quarter-final, to the game he has always wanted, with his best team so there are no excuses. They have belief in that there is a benchmark, as these players have beaten New Zealand. But I think the All Blacks are an unbelievable rugby team. They were breathtaking against South Africa.”

However, he can envisage an Irish victory to soar above all others.

“No matter how much training you do, not playing last weekend, and I know Steve Hansen said they hit game numbers on GPS in training, but whether [Italy v All Blacks] would have been a tough match for them – it’s not for me to say. New Zealand played their number one side against South Africa and they were due to play their number one side against us. In between [against Namibia and Canada] they mixed and matched.”

Former World Player of the Year Brodie Retallick has played 30 minutes since injuring his shoulder on July 27th while two-time recipient of the ultimate individual award, Beauden Barrett, and captain Kieran Read last played in the 63-0 win over Canada on October 2nd.

“Ireland have been under the pump mentally when they beat Russia and Samoa – which were hard games – and now they arrive to a space where almost all their personnel will be on the pitch.

“Rugby hasn’t changed,” he adds. “The desire, the level of commitment; look at the way Japan have thrown themselves into opponents. This isn’t old. Ireland are playing the best team in the world. A fully loaded All Blacks; I have them by about eight to 10 points. That’s not a huge amount in a game. Not at this tournament.”

O’Shea, due to his comments that the Springboks are the most enormous rugby team he has ever encountered following Italy’s 49-3 defeat, seemed to infer that Ireland are better off facing New Zealand than South Africa.

“No. You talk emotionally after a game but when you review it you understand that there were two or three chances when we had to put mental questions to South Africa. When you are playing teams that are stronger than you it is imperative that you make them think, ‘What the hell is going on here? Why are they still in the game?’

“If you were looking logically at the outcome of the quarter-finals it would be New Zealand, South Africa, England, Wales but this World Cup has asked other questions.

“You see Fiji’s performances against Australia and Wales, and ask how the hell did they lose to Uruguay? Put the stats from Fiji versus Uruguay in front of any sane person and they would tell you Fiji won by 50 points.

“That’s why we were upset not to get on the pitch against New Zealand. Who would have thought Joe’s team wouldn’t beat Japan? Now Japan, their style of play, has been brilliant for rugby but I think they will be overpowered because South Africa won’t feed the looseness. Rassie won’t allow them to be loose.”