In Retallick and Whitelock, Irish pair are facing the best lock pairing in the world 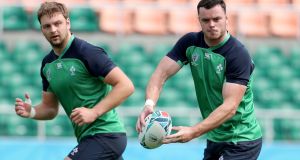 Iain Henderson and James Ryan: will start together for the first time against New Zealand in the World Cup quarter-final. Photograph: Dan Sheridan/Inpho

Although the Chicago win was the one which finally made history, a few things made the Dublin win seem even better. Firstly, it was on home soil in front of a feverish Aviva, secondly, it ensured Solider Field was no one-off, and thirdly, Brodie Retallick and Sam Whitelock were starting their 50th Test together.

They had been missing in Chicago but were back in harness last November, and that meant Ireland beat an All Blacks side containing simply the best lock pairing in the global game.

All bias aside, when Steve Hansen says as much, the rest of the game can only nod in agreement. Hansen has even gone so far as to describe them as the best partnership the All Blacks have ever had and, again, few Kiwis would quibble with that viewpoint.

“Retallick is one from outer space and Sammy is not far behind him,” said Hansen when they reached their half-century together against Ireland last November. “It quite often gets missed how good Sam Whitelock is because of how good Brodie Retallick is.

“I think they are right up there but I’m probably a bit biased. They are both good lineout forwards, so that gives you a one-two punch in the lineout. Both are good scrummagers and they can both play.”

The World Cup-winning pair are the most prolific second row partnership in All Blacks’ history, their 51 Test starts together eclipsing Ian Jones and Robin Brooke, who started 45 Tests together.

That then gives some idea of the task facing James Ryan and Iain Henderson in one of today’s most intriguing battles within a war.

Given reasonable luck with his body, the 23-year-old Ryan is undoubtedly on course for greatness. He is an ultra professional whose consistency and accuracy in everything he does prompts admiration from awe-struck senior teammates.

His work in the set-pieces and mauls, his voracious tackle counts and carries, always coming hard and square onto the ball and usually in the thick of the traffic, are almost always of the highest quality. Ryan is pure FIC (Future Irish Captain) material.

Not all careers have Ryan’s trajectory though.

After winning his first three caps off the bench, Ryan has accumulated 19 Test starts in the last two years, already within nine of the 27-year-old Henderson, who has started 28 Tests and made another 24 appearances off the bench.

These are surprising figures when set against Henderson’s dynamic performances in the Lions’ midweek games after suffering for being picked to start the first game of the tour against the New Zealand Provincial Barbarians; a heavy-legged, jet-lagged performance by almost all concerned.

As he can also cover the back row, Henderson was often used off the bench, and he has been more injury-prone as well. But Devin Toner’s durability and exceptional lineout and restart work has been the main reason for preventing Henderson from establishing himself in Ireland’s pack.

Now though, Henderson has forced himself in on merit, his performances underpinned by a heightened sense of responsibility and maturity. Evidence of this was his appointment as Ulster captain in succession to Rory Best. He has also assumed the job of calling Ireland’s lineout.

There were plenty of misgivings about Toner’s exclusion from the World Cup squad. Granted, this was more due to Jean Kleyn’s inclusion ahead of the Leinster man, and much of the concerns centred around the Irish lineout, which had often malfunctioned without Toner.

True, there were a couple of costly lost throws against Japan, but only one of them could be attributed to the call, and if anyone had forecast that Ireland would win 51 of 53 lineouts in the four pool games, it would have been seen as very optimistic.

In this and much else for the Ryan-Henderson partnership, they will be tested like never before by the All Blacks.

In contrast to Retallick and Whitelock, Ryan and Henderson have started only nine Tests together, even though the first was as long ago as November 2017 in the 28-19 win over Argentina.

Since then they were in harness for that opening act of escapology in the 2018 Six Nations, the Grand Slam coronation in Twickenham and the losing first Test in Australia before they were reunited again for last November’s win over Argentina.

They weren’t picked together for the win over the All Blacks, although Henderson did join Ryan when replacing Toner just past the hour. But coming into this World Cup, their only start together since then was for Ireland’s best Six Nations performance against France.

That opener against Scotland seemed like something of a defining game for the pair, and Henderson in particular. For if Ireland were to have a good World Cup, and to have a chance of beating the All Blacks today, they need Henderson at his brilliant best in tandem with Ryan.

As he showed with that searing break against the Scots, and as a lock who can play in the back row, Henderson is a little more athletic than even the phenomenal Ryan. For a big man, he seems light on his feet and has very good footwork too.

Henderson sounded genuinely pleased that Retallick was back in the All Blacks’ engine room after recovering from the dislocated shoulder he suffered against the Springboks last July in Wellington.

Simon Easterby has spoken of Henderson as a leader within the group, and the latter acknowledges that much has changed since the 2015 World Cup, when he was the young lock on the block.

“Paulie was there, Dev was there, Donnacha Ryan was there. Those players were people who I always watched growing up, and right from a young age of playing rugby professionally, I learned an awful lot from.

“And I think a lot more, slightly regrettably, than I might have had at that stage. So that’s massively exciting and that gives me massive confidence. And that’s not only in the secondrow department, that’s across the pitch.”

He welcomes the ensuing responsibility to perform, all the more so in a game such as this.

“You mightn’t feel as comfortable in a higher pressure situation but you want to be there. That’s the position any professional sportsperson strives to be in. No-one wants to be playing in games that nobody wants to watch.”

Nobody wants to say their farewells just yet either, and in Henderson’s case that includes his long-time team-mate at both Ulster and Ireland, the aforementioned skipper, Rory Best.

“It’s actually something that I hadn’t thought about. It didn’t really strike home, until after the last game [against Samoa] I thought ‘flip, that actually could have been Rory’s last game had we not performed’. And that didn’t hit home until driving in the bus from the stadium.

“I was like ‘flip, that’s actually frightening. That could have been a complete disaster’. I think the amount that he’s added he definitely deserves a performance from everyone around him.

Ireland haven’t won any of six previous quarter-finals but, again, this is not something Henderson had thought about until he is asked, and it hadn’t been discussed much within the camp.

“I’m a massive believer in statistics. Last year we were talking in the Kingspan about how Connacht hadn’t won up there in 50-something years. I was asked about it and I said: ‘They’re probably due a win at some stage, then’. And they came up and gave us a good hiding, so they did. It’s only a matter of time, whether it’s now or in the next 12 years, Ireland will make a semi-final. I think we’ve prepared well and it’s somewhere we want to go.”

This will actually be Henderson’s first start against the All Blacks. As well as being a replacement last November, he was a sub in the defeat by them at home in 2016, two weeks after the Chicago game came too early for himself, Peter O’Mahony and Sean O’Brien.

“We were going out saying: ‘Flip, it’s our time to have a crack at them now. Everyone else was over there having a go.’ And that actually riled us up more, the fact that we didn’t get a chance to play there [Chicago].

“Again, that has put a taste in people’s mouths for what we have the potential to do. The performances that we’ve shown thus far in the World Cup probably wouldn’t warrant that. I think we need to step up to the next level and I think everyone is prepared to.

“We’ve been building nicely and training feels like we’re building nicely into this next few days. More or less all our preparation is done now. We just have to make sure that come Saturday, we deliver.”

As Hansen also likes to say, they’re called Tests for a reason. Today though, not least for Ryan and Henderson, this is the litmus test.