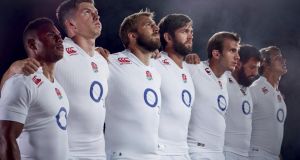 England will wear symbols of the Victoria Cross for the first time this autumn after rubber grip areas inspired by the military medal were added to the national side’s new kit.

Stuart Lancaster has drawn heavily on England’s rich rugby history to instil a stronger sense of national pride throughout his tenure as head coach.

The former Leeds boss created the Arthur Harrison Award, where England coaches select a winner after every match for the player producing the best defensive performance.

Harrison is England’s only rugby international to be awarded the Victoria Cross, bestowed posthumously after he lost his life in the Zeebrugge raid of April 1918 in the First World War.

National teams would have to seek International Rugby Board approval (IRB) to display political or religious symbols or statements on kit.

Press Association Sport understands however that the Victoria Cross-inspired grip areas across the chest of the new England home shirt are not deemed to fall into either category.

The red rose emblem has been moved into the centre of the shirts for the first time. Lancaster’s men will wear the red change kit in their autumn Test match against Samoa at Twickenham, on Saturday, November 22nd.

England are expected to launch new kits in time for the 2015 World Cup, given their status as tournament hosts.

Football governing body FIFA eventually backed down after threatening to ban the England team from wearing poppies on their shirts in November 2011.

Prime Minister David Cameron and Prince William intervened in the row, before FIFA allowed England to wear the poppies, to back the British Legion’s annual Remembrance campaign.

There has never been any objection from governing bodies to rugby teams displaying poppies as part of kit design.

National unions must seek ratification for official kits for World Cups and other IRB-run global competitions, but do not need the world governing body to sign off every design.

Stuart Lancaster has been at pains to help England solve a perceived disconnection with identity and national pride.

The former schoolteacher has spent time researching England’s rugby and social past through the RFU’s team of historians.

Lancaster has spoken animatedly about England’s need to embrace the past to help his current squad appreciate the depth and significance of their modern-day roles.

The 44-year-old often asks guest speakers to address his squad, seeking any edge in the build-up to hosting next year’s showpiece tournament.

Lancaster himself though will pick out snapshots of England’s past if he spies anything that could hand his players an ounce of extra belonging.

He once addressed his squad on the story of England’s first black player, James Peters. Lancaster admitted surprise at discovering Peters won his first cap in 1907, and was pleased to share the tale with his players, given the squad’s multi-cultural make-up.

1 Ronan O’Gara: Ireland need to be braver than usual ‘in a shoot-out for gold’
2 Jackie Tyrrell: We’ve got the championship back. But where’s the physicality?
3 France v Ireland: Ireland player profiles
4 Football 2020: It’s a knockout revisited – ‘You played, you lost, you went home’
5 Jones says Barbarians fiasco made rugby a ‘laughing stock’
Real news has value SUBSCRIBE