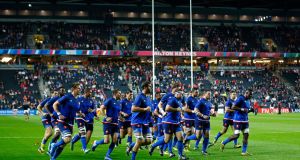 France warm up for the game against Canada. “The World Cup is really something special in France. It’s a competition that works well with the French for some reason.” Photo: Darren Staples/Reuters

And so it has come to pass pretty much exactly as expected. France were long ago cast as 18/1 outsiders, incapable of finishing in the top half of the Six Nations or beating Ireland even once in four attempts under Philippe Saint-André’s watch.

Yet sure enough, they arrive for the two countries’ crunch meeting on the back of five wins, more unified, better prepared, fitter and settled, reduced to 10/1 in the betting. Big bad and mean, and voracious for a win over Ireland.

“I think it will be a great game between the fifth- and sixth-ranked nations in the world,” said the French coach yesterday, holding court to the 70-strong French media corps at their Vale of Glamorgan base in strikingly relaxed mood. “My players are starving, starving for this game.”

Asked why it is that this appears to be a different France compared to the Six Nations, Saint-André said: “Because my guys play 40 matches a season and we get them for four or five days before international games. They are mentally exhausted and knackered in February. I worked in England (as coach of Sale) so I also understand how Ireland are very, very focused on their international team. For us, our focus is once in each four years.”

After their ten-day run-up to a game that they have long since identified as their biggest game in four years, Les Bleus are in an altogether different place compared to four years ago.

Laurent Depret is the long-standing and respected reporter with Radio Monte Carlo, the Paris-based station largely devoted to sport. He describes the mood of the French camp, revelling in the sunshine and on-site, state of the art facilities of the Vale of Glamorgan as “calm and serene”, and echoes Saint-André’s comments about the players looking forward to this game like children in a sweet shop.

Depret also says “you cannot compare” the mood in the French camp to four years ago in New Zealand, when they lost to the All Blacks and Tonga in the pool stages before losing the final to the hosts by a point.

“It’s totally different. It was a squad of captains, a squad of ‘chapels’, of churches. You had several churches inside the squad. You had Toulouse, you had Bourgoin, you had Biarritz, you had guys under the radar who were happy to be there, that’s all. It was a team of ‘papas’, a team of big daddies. So many were used to being captain or vice captain in their clubs; such as Nicolas Mas, Julien Bonnaire, Julien Pierre, Morgan Parra, Dimitri Yachvili, Imanol Harinordoquy, Aurelien Rougerie, Lionel Nallet, Dimitri Szarzewski.”

“All were captains in their clubs. All had big characters, big minds and, big egos as well. And Marc Lievrement was not the figure, the character of someone above them. He was a very gifted coach, but a coach of a ProD2 team with Dax who three times refused the job before Bernard Lapasset told him ‘this is not a question Marc. You take the job’. Because he didn’t want a war between Guy Noves, Fabien Galthie, Rafael Ibanez and Philippe Saint-André, and so Marc fitted the suit.”

“Now you have a mixture of young players playing in their first World Cup, and ‘daddies’,” adds Depret.

None of this is a surprise for Ronan O’Gara, now in his third season with Racing Metro. “If you look at their season in the Top 14, they play a savage amount of rugby. It’s only when you come here you realise how demanding the Top 14 is. Now they’ve been together for three months and when you put that with the natural ability they have, they’ve the capabilities to do very well in the competition.”

“France have struggled over the number ten jersey and suddenly Philippe Saint-André’s big gamble on Freddy Michalak is working,” says Arnaud, “and this is a huge difference, because number ten was the key problem in the French team over the last six or seven years, because remember they had to play Morgan Parra (a scrumhalf) ahead of Francois Trinh-Duc in the World Cup four years ago.”

The day before when arriving in the Vale of Glamorgan via the tradesman’s entrance, as it were, when passing one of the training pitches, Frederic Michalak was out there on his own, with just a rugby ball for company. The day before he had been practising short restarts and place-kicking with kicking coach Romain Teulet, one-time metronome goalkicker with Castres.

“I think he was born with world-class ability but he was very unlucky with bad injuries,” said Saint-André. “But a fly-half is like a nice red wine; the older you are, the better you are. He is also one of the few backs who has played in two World Cups before, so that is very important.”

Michalak has himself said he is playing as if every minute on the pitch will be his last. He is also a son of Toulouse, the one player who is mostly likely to go off script and play heads-up rugby.

“He beat us in that Munster-Toulouse semi-final back in 2003,” recalls O’Gara. “There is a perception of him but perceptions can be wrong. You talk to French players who know him and he is one of the most hard-working, diligent players in the game, like Paul O’Connell, and he’s getting his reward for that. Yea, he can be brittle in defence but he’s capable of changing games and winning games.”

It’s also worth noting that France is the only country to have reached at least the semi-finals at each of the last three World Cups.

Unhelpfully, from an Irish perspective, the French media have irritated their players by repeated questions of Ireland, and how good they are, with Saint-André perhaps stoking this up by describing them as a “beautiful team” as well as referring to them as back-to-back Six Nations champions in maintaining Ireland are favourites and all the pressure is on them.

“It was very funny, because they (the French players) saw on the internet how wonderful Ireland were against Romania,” says David.

“They say ‘hold on, they play a weaker Romania side than us when we had only four days between the two matches, and there was a difference of six points in the scores? And they say Ireland were great?’ So they have been irritated by the difference in treatment. That France were shit against Romania and how exceptional and clinical Ireland were against Romania.”

“The press have said that the Irish are playing great rugby, but it’s never great when the team you are going to play against are being pitted as favourites. Obviously we’d like see that. But rightly so that they’re being pitted as favourites. They really are quality side and we can’t deny that. But obviously we’d like to make a few things right from our side.”

Spedding also indicated how much more the World Cup now means compared to the Six Nations, not only to the French players but perhaps also their supports as well.

“There’s a lot of guys who played in the last final, three or four of them in the side, who know that this is there last shot and really want to leave on a high. The World Cup is really something special in France. If you see the build-up in France at the World Cup, it shows the French side. It’s a competition that works well with the French for some reason. It’s a competition close to the French hearts, so we know we’ve got a lot of pressure on us, a lot of people counting on us.”

“If you’d seen the support we had when we played at Twickenham in our first warm-up game, Twickenham was pretty much packed with French people. I’m sure there’ll be French people there on Sunday, so we want to make our supporters proud and give them something to shout for.”

“Another element is that France have rediscovered a good scrum,” adds Arnaud.

“It is essential in the present psyche to have a good scrum. So what we can see now is that the elements of the puzzle are coming together. Whether the puzzle will be finished, we don’t know. There’s a lot at stake this weekend. It will be difficult for France to bounce back six days later against the All Blacks after a defeat by Ireland because at the back of their minds they know the first three matches were a warm-up for this game.”

This game is as pivotal for France as it is for Ireland, and it shows.

1 Liverpool among clubs to argue against paying €384m TV rebate
2 Munster braced for worst of financial crisis due to Thomond Park debt
3 Decision expected next week on staging of College Football game in August
4 Michael Walker: Henry’s hand of faith and its part in French football’s Waterloo
5 Most Americans would avoid sporting events until coronavirus vaccine is available
Real news has value SUBSCRIBE