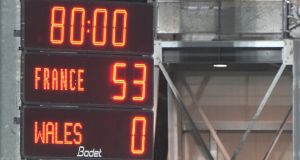 The Women’s Six Nations kicked off last weekend amid a fanfare.

The news that the competition would become a standalone event was welcomed by sports fans as it showcases the talents we’ve become used to seeing and ensures the women’s tournament is not in direct competition with that of their male counterparts.

Rugby has also had to shed a stereotype that had plagued the sport for so long – ie they are not interested in the women’s game. They showed us that by cancelling the women’s tournament in the middle of a global pandemic. Yet, they found a way for the men’s one to go ahead.

We all know this came down to money and sponsorship. We all know this was due to the complexities surrounding the women’s game. But still, the moral argument was to at least let the girls play.

Throughout the history of the competition, there have been only three winners. England have won 16 titles, France have six, and the rest have two, with only Ireland breaking the status quo in the last decade.

But this year was supposed to be different.

The enthusiasm put forward was unlike any other. Unbelievable advertisements were visible across social media, and pre-game hype videos were also available for everyone to see. The teams were incorporated into a Zoom media scrum, players were introduced and went about promoting their sport.

The Six Nations even devised a fantasy Six Nations tournament, encouraging fans to play along, set up leagues, and drive up the engagement. It was also an opportunity for fans, both die-hard and casual, to select players, research them and start knowing who represented their country. As a friend of mine put it recently, I’ll give you a euro if you can name some of the players.

There was also a much-needed change in format, with no overlapping kick-off times, with countries and the Six Nations striking TV deals, with countries showing their games on free to air TV.

So, what could’ve gone wrong? Well, the advertisement for a prime time women’s competition ended up being two thrashings, with the professional team (England) beating (amateur) side Scotland 52-10, while France (semi-professional) beat Wales (amateur) by 53 points. The torrid time France gave Wales became a source of criticism online.

Let me make this clear, nobody is blaming the Welsh players. People are blaming are the Welsh Rugby Union for allowing their team to go out there without proper structures and get absolutely thrashed by France.

She also regularly had to travel around the country on Wednesdays as a coach for university fixtures. Her weekends were spent training and playing games for club, region, or country. Since moving to the Bristol Bears, Siwan has faced a lengthy round-trip to Cardiff for international training.

This story is incredibly familiar if you are a fan of the Irish women’s rugby team. In January 2020, the Irish team played Wales in a Six Nations warm-up game. The following morning, at 7am, Linda Djougang began a 13-hour shift in Tallaght Hospital as a student nurse. Linda’s story can be replicated across the Six Nations.

We have seen countless times how these girls juggle their work life, home life, and rugby career all because the IRFU and other governing bodies have struggled to put in place a system where players can be professional.

Eventually, world rugby and their respective associations within every country will have to come together and try to formulate a plan to get the women’s game up and running.

It’s no use relying on random underdogs to come up to try and upset the big dogs every once in a while. It’s no use depending on the players who selflessly give up their time to play for their country and keep us entertained. Something has to be done. Something has to change.

Because any girl watching the games over the weekend will not be inspired to don a rugby jersey and continue the cycle of women’s rugby.

1 Blackmore back among the winners at Fairyhouse