Italy 20 Scotland 36: Scotland finally get over the line against Italy 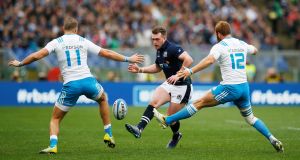 Captain Greig Laidlaw kicked Scotland to a 36-20 victory over Italy in a ferocious Six Nations match in Rome on Saturday, their first victory in the tournament for two years.

Scotland flankers John Barclay and John Hardie both powered over the line in the early stages to give the visitors control of the match after nine successive Six Nations losses.

Italy struck back with a fine try by hooker Leonardo Ghiraldini following a charge from Gonzalo Garcia to cut the deficit to 17-10 at halftime.