Ireland women gearing up for Moscow 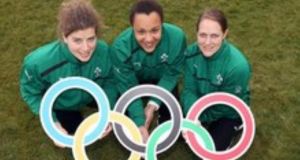 The journey began just over a year ago when a preliminary training squad for a Women’s Sevens team was announced. The objective then was to qualify for the Rugby World Cup.

That goal achieved, the last year has been about building on the experience of qualification and preparing to take on the best women’s Sevens sides in the world.

Along the way the Irish women have gained a huge amount of experience and added silverware to the cupboard. Now, the final 12 has been named to challenge for the Rugby World Cup and to secure a regular place in the women’s Sevens tournament cycle.

Injury has ruled out a number of experienced squad members but coach Jon Skurr is confident that this team will do the country proud: “When we started the sevens programme last year we set the Rugby World Cup as our goal. We achieved it and since then these girls have worked very hard to improve their sevens skills.

“Along the way we have picked up some notable wins but this is the biggest test of all. It is really tough on those girls who have missed out, particularly through injury, but I know that the 12 we have selected will do their best to make everyone who has worked for this proud of them.”