Ireland go from sublime to careless but seal bonus-point victory 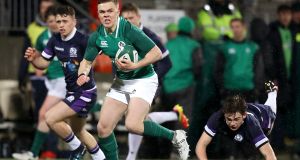 Ireland will cherish the bonus-point victory, the performance vacillating between the sublime and the careless. The same shortcomings that pockmarked previous displays were evident again but to their credit the home side showed character and grit to find a way to win, when they could so easily have lost.

Irish number eight Jack O’Sullivan was exceptional and not just in the two tries he scored, Tom O’Toole and Michael Silvester only marginally behind him. The problem for this young side is that they trade in extremes, good and bad.

Conditions were challenging, a cold night exacerbated by rain, making handling difficult and placing a premium on accuracy, so in that respect Ireland’s performance in the opening throes of the contest was hugely impressive. Unfortunately that cohesion would degenerate alarmingly as the game unfolded.

Following a bout of kick tennis, the home drove a lineout about 15-metres, Angus Curtis used his feet to break the first line of defence and from quick ruck ball, Jack O’Sullivan took possession at pace, running a super line and powering through the remnants of the Scottish defence for a fine try.

Irish outhalf Harry Byrne kicked a conversion and then tagged on a brace of penalties as Ireland looked threatening every time they went through a couple of phases; the return might have been even more lucrative but for some brave last ditch Scottish defence.

Ronan Kelleher had been at the epicentre of Ireland’s better moments including one superb break, but a shoulder injury on 21 minutes forced him to leave the field. The visitors gradually established a foothold in the game as handling errors crept into Ireland’s play.

Scottish outhalf Ross Thompson kicked a brace of penalties, the second of which Ireland were happy to concede in some respects as they manage to repel several Scottish carries a matter of metres from their line. At 13-6 the visitors were back in the contest but five minutes from the interval Ireland claimed a second try, the genesis of which was a wonderful break from the impressive Michael Silvester.

He fielded a kick inside his own half, swerved past a couple of Scottish players, accelerated through a gap and although he hesitated as he looked for support on the Scottish 22, Ireland maintained possession to force a five metre scrum. Jack O’Sullivan surged off the base and although grounded just short openside flanker Matthew Agnew burrowed over from a metre.

Byrne couldn’t tag on the conversion but the home side went in 18-6 ahead at the interval and the Irish outhalf will have been more disappointed in missing a 22-metre penalty four minutes after the re-start when the Irish eight had shunted their counterparts off a Scottish scrum put-in.

The Scots were gifted a try in rather bizarre circumstances, Byrne’s diagonal kick was thumped downfield by Scottish fullback Paddy Dewhurst and as Ireland’s right wing Angus Kernohan slid to gather possession the ball skewed from his gasp over the line and Kyle Rowe was on hand to dot down.

The outstanding Irish tighthead prop Tom O’Toole played a major part in Ireland’s riposte, a try for Matthew Dalton but three minutes later after conceding a careless penalty from the re-start, they then gave up a try from the ensuing lineout maul, converted by Thompson to make it 23-18.

Ireland craved one moment of attacking clarity and it was apt it was provided by Jack O’Sullivan, a wonderful finish from 30-metres - his fourth try in the last two games – that outlined what an outstanding player he’s been for this team throughout the tournament.