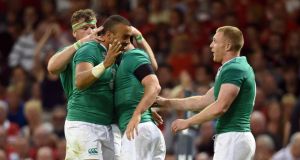 Simon Zebo is congratulated by three other Ireland try scorers, Jamie Heaslip, Felix Jones and Keith Earls after his score against Wales at the Millennium Stadium. Photograph: PA

The final scoreline, if anything, flattered Wales. Ireland were way more cohesive than a Welsh team cobbled together from World Cup preparations that were thus far, evidently, far more concentrated on physical strength and fitness.

After the early skirmishes, Ireland quickly assumed complete command. One team looked like they were playing their umpteenth game together, the other like they’d just been introduced before kick-off. Defensively, Wales seemed to lack communication, whereas despite their unfamiliarity, Ireland’s array of new combinations clicked effectively.

When it came to the rugby, Ireland were way more effective. Their set-pieces and maul were significantly sharper, as was much of their breakdown work.

There was planning and shape to their attack, as they continually started with the soft Welsh midfield as their point of attack for Darren Cave and Keith Earls, and then went from there. A host of players held their hands up, and virtually none dirtied their bib.

The worst sight of the day from an Irish perspective by some distance was that of Tommy O’Donnell lying motionless on the pitch and receving attention from half a dozen medics, and being given an oxygen mask before being stretchered off; clutching Dr Eanna Falvey as he did so.

The Munster flanker had made yet another of innumerable strong carries in a high octane performance, fending off one player before being double tackled from behind, and whatever way his right elbow or arm hit the ground, it possibly jarred his shoulder.

You’d hope against hope that all the measures taken with such a cracking player and top lad during the four minute stoppage were precautionary.

There will also be concern over Andrew Trimble, who walked off without any obvious bother but as early as the 35th minute, and after a storming performance until then which assuredly nails down his World Cup squad place if fit.

All the front row went well, particularly Richardt Strauss, while Donnacha Ryan came through the 80 well, while Dan Tuohhy also put himself about off the bench. Jordi Murphy’s all-round work-rate and O’Donnell’s performance also stood out, while Jamie Heaslip coasted through the game with some class.

Eoin Reddan looked as sharp as a tac at the base, quick to the breakdown, ensuing a high tempo, switching and varying the point of attack, sniping and box kicking to good effect.

Paddy Jackson attacked the gain line well, although was culpable for kicking the ball away three times in good attacking positions and missed an initial sitter - although to his credit he didn’t let that bother him.

Darren Cave ran some strong lines against a decidedly soft Welsh midfield defence and after a rusty start, Keith Earls looked the part, especially on the ball, where his footwork and acceleration rooted Welsh defenders to the spot.

Trimble was the pick of the outside backs, with his chasing, hitting and all-round physicality, and both Felix Jones and Fergus McFadden ran strongly with big breaks in that opening quarter.

Murphy made an early steal at a turnover, Henderson taking a good line off O’Donnell’s pass and thereafter Ireland dominated for long stretches. Jackson put boot to ball four times in the first four minutes to test the Welsh back three through his willing chasers, notably Trimble, and after conceding a penalty for going off his feet, McFadden was worked free cleverly from deep by Reddan on the blind side, who then linked with Earls but was unable to hold his return pass.

Even so, a try soon followed when Scott Wiliams spilled Mike Phillips’ poor pass off the ensuing scrum and then lost possession when tackled by Reddan. Murphy and Henderson took the ball up as Ireland worked an overlap for Heaslip to celebrate becoming Ireland’s most-capped back-rower with his tenth try in his 73rd test for his country.

The Welsh defenders even switched off to allow Heaslip cut in near the posts, although Jackson pushed the conversion horribly wide.

After Jones left Williams for dead with a counter-attack and find the supporting Heaslip, although off the recycle Jackson opted to grubber through for a second time. It was beginning to look like a pre-prepared but ill-advised tactic.

In any event, Jackson atoned with a good penalty after a strong defensive line-out and more probing by Cave and Earls in midfield, Richardt Strauss went to the concussion bin for ten minutes, Richard Hibbard saved a try by Earls after the centre stepped Williams and Dominic Day, and bounced Hallam Amos.

Instead, the Irish scrum twisted the Welsh back-row for Cave to again truck it up, and even the centre looked surprised to score as Phillips showed him the inside and Amos couldn’t plug the gap which Justin Tipuric was meant to fill.

When Wales went to the corner, Henderson nicked the throw and Trimble followed up Reddan’s box kick by executing a choke tackle on Eli Walker. Reddan followed up with a tap and blindside snipe and chase, before Trimble augmented his good work by leaving the line and reading James Hook’s long flat pass to nail Walker. The ball bounced off the falling winger’s knee invitingly for Earls to score from 40 metres to mark his return after a two and a half years’ absence with his 14 try in his 40th test.

Jones nearly put Trimble over when nailed by Walker, and to nit pick from the cheap seats McFadden possibly took a tad too much out of the ball, and compensation came by way of a Jackson penalty. Incredibly, it was 25-0 after 34 minutes.

After Trimble went off to be replaced by Simon Zebo with McFadden switching wings, Wales had to come to life, and just before half time did so. When they went to the corner, Tipuric peeled around the front from Dan Baker’s tap catch and draw Strauss to put Hibbard over.

Finally going through phases and putting width on the ball, they stretched Ireland and Walker almost completed an adroit touchdown off an Amos grubber.

A second try before the break would have really flattered Wales; even 25-7 at half time did.

The Welsh cause wasn’t helped by debutant Ross Moriarty earning a yellow card for a swinging arm on Zebo. Warren Gatland likes the “nasty edge” of the son of former Welsh player Paul and nephew of Richard, but that was thuggish from a player who was red-carded for the English Under-20s against their Irish counterparts two years ago.

In his absence Zebo scored a blindside try from O’Donnell’s pass after the potent Irish maul had made good yardage, and then Zebo put Jones over with a superb double skip pass. This followed good work in the tackle zone by O’Donnell, Ryan and Heaslip. Athough Jackson missed both conversions, the second shaving the posts, Ireland led 35-7 by the hour mark.

Ireland lost their shape a little amid the expected raft of replacements, and Tipuric initiated and completed a fine Welshh try with an offload to Tyler Morgan before taking Amos’ pass to score neatly.

Even so, Ian Madigan injected some real zip into the Irish attack, and made one storming break which alas culminated in the stoppage for O’Donnell. That made pretty much everybody grateful for the final whistle, although not before Gareth Anscombe, impressive in his debut cameo, put the hitherto anonymous Cuthbert over against 14 men and tagged his second touchline conversion.