Cubs move over, Irish lionhearts cast their own spell in Chicago 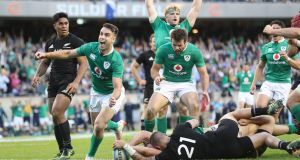 History-breakers and history-makers. To call this a once-in-a-lifetime victory doesn’t even do it justice, given it eventually transpired to be a win of several life times. And as a one-off win, in a truly one-off occasion, it has to be ranked as simply the best Irish rugby win ever.

Chicago will always be Ireland’s kind of town after this. As Rob Kearney noted afterwards, there was indeed something in the Chicago air following on from the Chicago Cubs ending their 108-year World Series drought on Wednesday.

As it was with Eden Park, the Millennium Stadium, the Olympic Stadium and Wembley, so it was in Soldier Field, as the Green Army descended on the warm, sun-drenched home of the Bears to make it another corner of Ireland for a day. Like those days, the atmosphere crackled as if at an open-air concert.

There was nothing remotely plucky or lucky about this landmark win. Rory Best and Johnny Sexton continually opted to turn down three-pointers in going up the line, and the execution, whether scoring directly off the ensuing drives or having to go out wide, was outstanding. Ireland took the game to New Zealand from the off and never let up, fully deserving a five tries to four win.

To put this in context, not only was it Ireland’s first win over New Zealand in 29 attempts going back to 1905, but they also ended the All Blacks’ 18-match Test winning run and in the process inflicted on them only a fourth defeat in their last 65 matches. Plus, it was only the sixth time in history that they conceded 40 points.

“Blown away,” said Joe Schmidt, shaking his head and struggling initially to put this win in context. “Blown away, because a number of things made it more complicated for us. Over half the squad played Pro12 last week. We got together on Sunday, really, trained Monday, flew Monday evening. We did a bit of a walk-through on Tuesday afternoon, had a day off on Wednesday, trained and trained well Thursday.

“I think everyone got a bit of confidence from us training well on Thursday. Everyone had obviously really committed to knowing their role and being really motivated to be not just accurate but enthusiastic as well. So that gave us a bit of confidence.

“Our captain’s run got brought forward from 11 to 9am yesterday [Friday] so that was up pretty early. We went under the city, really, along by the railway tracks. There’s some fantastic experiences, seeing all these millions of people above us while we’re sneaking underneath and when we were coming back I think some of them thought, because we had a police escort, that maybe there were some Cubs in the bus and were cheering us.

“But in the end, just looking up in the crowd, how many green jerseys, how much enthusiasm was there and I think, as Rory said, the enthusiasm was reciprocated by the players on the pitch. They really dug in and rolled their sleeves up.”

The squad flew home yesterday, Schmidt conceding that the ban on alcohol probably wouldn’t make it to take off, and he included himself in that. There’s liable to be a much-changed team at home to Canada next Saturday, for which over 47,000 tickets have been sold, before the sell-outs at home to a now vengeful All Blacks and then the Wallabies.

Expectations will be all the headier now, as Schmidt reflected on this being a new benchmark.

“It’s kind of daunting. The amount of emotion that went into that, as well as organisation, because we didn’t have too much time to train, but the training we did was bang on. All we can guarantee is that we’ll keep working really hard and the players are really receptive to working really hard, and we’ll just keep trying to grow the group.

“But I said earlier in the week that it’s a reference point for us, and some of those reference points are incredibly encouraging. They still slipped through and got some tries that we’d be pretty frustrated about, especially [Liam] Squire got one that was frustrating [an offload in the build-up to the fourth try] and we got out of our system in the lead-up to their second try.

“But, at the same time, sometimes you don’t get too analytical after a win like that. You just go: ‘I’m delighted that happened. I’ll have a look at it tonight and tomorrow morning, and probably have another look at it on the plane on the way back in economy class with the rest of the management, and the players will have a good sleep up front in the business class.”

Okay, even the All Blacks can have relative off days and they were a little off colour, underpowered in their engine room and perhaps even a little sated after backing up their World Cup win with a whirlwind Rugby Championship and a record 18 successive Test wins.

“The reality is that we did get them when they were a little bit vulnerable,” Schmidt admitted. “I remember after the World Cup and people said ‘why is there such a big gap between north and south?’ But there’s no chasm there. It only takes a little bit of fluctuation for someone to be off their game and another team to knock them over. That’s why I said that the All Blacks were a little bit under-staffed today, and you wouldn’t say we were at full strength necessarily but we were at full fitness, and that was what we planned all along.

“I know some of the decisions were queried but we had in our minds exactly what we needed, or felt we needed, to do. Now, you don’t always get that right, and things don’t always work out as you hope, so it’s daunting from that perspective because those margins are very fine.”

Anthony Foley’s spirit hung over this game, from the moment Munster players stood to the front of their human eight in recognition of the late great Axel.

“We made a figure of eight. For me personally, Murray and all the Munster boys to stand at the front, that was big,” said CJ Stander. “It’s the same as the Glasgow match. We wanted to give something back to him. He meant so much to me, he was really the rock in my rugby the last four years. He showed me a lot about what he’d learned over the years, and I think he pushed me to the next level.

“You just think of what type of man he was, what a legend he was. What he gave to me as a rugby player. Then in that 60th minute when you’re tired, you just think why you’re playing this match. It went well today, and everything we gave was for him. So this match was for Axel.”