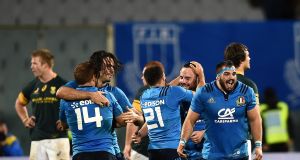 “It was four years ago now I spent some time with the Philly Eagles,” went Conor O’Shea. “Ten years before they were one [win] in 12, then five in seven, and now they are Superbowl champions.”

Burned their city to the ground celebrating.

O’Shea refuses to imagine such scenes in Rome come 2023 but the process is the same.

“It’s why sport fascinates me: the growth of teams, franchises, organisation and how they evolve. The Eagles coach at the time [Chip Kelly] was a real maverick, university guy, he’s gone now and there is someone else there but he played his part because he changed the mindset of what he wanted to do but they got rid of him because he wasn’t successful enough.”

This could prove O’Shea’s own sporting epitaph (Italy have won four of 18 Test matches since his arrival).

“People say do you feel under pressure? Really? I’m going with Italy to the Aviva stadium in front of 50,000 in an international rugby game with a sport I love. Don’t take your life too seriously. There are more pressurised things in life.”

The 47-year-old makes similar pronouncements wherever he roams. Rarely dull, never controversial, O’Shea’s stream of consciousness eventually flows back to the southern bank of Lake Garda. Sirmione is home, a beautiful town placed strategically between Zebre and Benetton.

“We only took over Zebre – the Federation did – seven months ago. They were almost gone. But this is what gives me massive hope: the Pro14 said we don’t want you [two Italian franchises] but when they came in and saw what we’ve done there is now a long-term commitment.”

O’Shea concedes that Zebre have no player depth.

“For next year we have already planed to improve that – there will be younger players from the Italy 20s to bring up and we are targeting overseas players, through Brads, and not just to tick a box, to make them better.

“Same with Kieran Crowley in Treviso. It’s not easy but it’s fun because we are beginning to see change . . .”

“Go to Treviso, it is a rugby town like Limerick now. They are not going to win the Pro14. They probably won’t qualify for the Champions Cup but they could become the first Italian side to reach a European quarter-final in the Challenge Cup.”

Seeds have been planted. The constant gardener being Steve Aboud (who set up the first Irish academy in the 1990s).

“In many ways Stevie is more important than I am.”

There is a major problem in Italy that O’Shea and Aboud must work around. No sport in schools. No rugby and they leave a year later, so players enter the system 18 going on 19.

Joe Schmidt knew about Jordan Larmour, Andrew Porter and James Ryan when they were 15. Can O’Shea see the Italian versions, do they exist?

“We have a pathway that will identify them. Last year’s under-20s side [who beat Ireland at the Junior World Cup], I would like to think, will be the worst Italy 20s we produce. Everyone thinks it will produce lots of players, and it will but . . .”

This is part of the plan.

“I remember years and years ago I went to France with the RFU to watch the England under-21s. There was Ben Foden, Mike Brown, James Haskell, Dylan Hartley, Chris Robshaw, Tom Rees. Our goal in the RFU was to make that the worst underage side, to make every team that came after better.

So you may have to stay on past your current contract (which ends in July 2020)?

“Our future is now. I want to leave Sergio Parisse (34) and Alessandro Zanni (34) with special memories like what Keith Wood had for Ireland at the end.”

That is another problem. Parisse has 130 caps. 96 defeats. The quality of player is simply not there yet. Really, it never has been. There is no Karl Mullen Grand Slam team from the 1940s or Willie John, Slattery, Gibson era in the 1970s or the “brilliant players” O’Shea lists from the 1990s.

Even Diego Dominguez was Argentinean.

“First and foremost you look after getting your own systems right. Our challenge is not playing numbers – they have grown four fold in the last 10 years – it is getting control of a young player when we spot him. We haven’t got that right yet.

“Ireland went through that as well when there are clubs, districts and politics. The Irish system is not perfect. They are not the Waltons, some happy family on the mountain. I’m sure there are conflict between the schools and provinces in Ireland. You see that. There are always going to be egos in sport. We are beginning to put a system in place.”

The task seems unfathomable but O’Shea turned the bloodstained Harlequins into Premiership champions within three seasons.

Italy beating South Africa in November 2016 seemed like a turning point but the victory has been devalued in a short space of time by multiple Springbok calamities.

“After the Australia tour I went to the Brisbane Lions AFL team. Talking to their coach [Chris Fagan] he had gone from Hawthorn to the Lions – a lower ranked team – and he talked about celebrating the little wins without the big wins – which are what give you energy. That’s what we have to do with Italy.”

The monumental task requires fingers in the soil. O’Shea sees a country of 60 million people that may wander off traditional pursuits now the Azzurri have failed to qualify for Russia this summer.

“In many ways Italy not qualifying for the soccer World Cup was the best thing that could have happened to Italian sport. It made people sit up and say: our identity in Italy is football. But it makes people re-evaluate.  Maybe there is more to life than . . .”

Than calcio? In Italia? Non.

O’Shea was among the culling that immediately preceded the Irish rugby renaissance of the 2000s. When the worm turned. When Warren Gatland gutted the squad after a 50-point drubbing at Twickenham. In came Stringer, O’Gara, Hayes, Horgan, Easterby to help O’Driscoll sing in Paris and beyond.

“It’ll come,” says O’Shea of that elusive Six Nations victory, the last coming at Murrayfield in 2015 and before that catching an injury-ravaged Ireland in 2013. “We have to go through a cycle of teams mentally preparing for us differently. That’s what Ireland went through. You arrive and it is the be-all-and-end-all game – the clash of titans – as opposed to us coming along and ‘Aw, they’re great this Italy team, they are competitive and aren’t they lovely’ but deep down they think they will win.

“That will change over time. It’s why sport fascinates me: the growth of teams, franchises, organisation and how they evolve”

1 Owen Doyle: Creeping professionalism of schools rugby a threat to the game
2 GAA officials and referees brace themselves as new rules kick in, and this time it's for real
3 Coco Gauff pulls off biggest shock yet by beating Naomi Osaka
4 Niall Quinn happy to step into the breach at FAI
5 Scotland’s Finn Russell missed training after Sunday drinking session
Real news has value SUBSCRIBE