Ireland coach Joe Schmidt says England were more physical than Ireland as his side begin their Six Nations title defence with a 32-20 defeat. 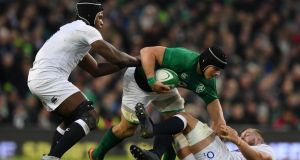 CJ Stander of Ireland is tackled by Maro Itoje and George Kruis of England during the Six Nations match at the Aviva stadium. Photograph: Dan Mullan/Getty Images

Bad news on CJ Stander. The Ireland number eight is suspected to have suffered a fractured cheekbone and eye socket. He seemingly played 62 minutes with the injury, just one example of the punishing toll England exacted from Ireland in a performance and result that harks back to yesteryear.

History teaches Joe Schmidt lessons that he refuses to deny. The “bullying” and battering Ireland received at the Aviva stadium was undeniable.

Ireland know this jig, under Schmidt they have danced to it before.

In November 2016, New Zealand came to Dublin bitter and embarrassed from that historic defeat on Chicago’s Soldier Field. The All Blacks added freakishly sized men, Brodie Retallick and Sam Whitelock, to their ranks before bullying Ireland into submission.

Now, in February 2019, England came to Dublin bitter and embarrassed from St Patrick’s Day in Twickenham after a Grand Slam was clinched by the same Irish men who stood before them. Eddie Jones added Billy Vunipola and Manu Tuilagi to his ranks before bullying Ireland into submission.

“Against the All Blacks two years’ ago we got bullied here,” said Schmidt. “You have got to be prepared to give as good as you get, I don’t think we did that tonight. The players are disappointed they didn’t have the same physical edge.

“Now, we don’t have the same personalities they have. We have got to make sure our solutions get pressure on the ball. I don’t think we got a turnover on the ground tonight.

“There was very little allowed to happen on the ground,” Schmidt complained. “There was a lot of people off their feet. It turned into that muddy sort of battle.”

England’s traditional game in full bloom again; forcing Ireland to meet them in the physical stakes. They were always bigger men, now they have proved themselves just as clever.

“There was quite a lot of volume with them stirring each other up to get off the line with physical intent.”

Many Irish people will remember the bad old days. Replace the names of Rodber and Deano, Dallaglio and Johnson with the Vunipolas, Kruis and Itoje.

“We were physically bettered,” Schmidt conceded after this pulverising 32-20 loss. “I don’t think I’ve seen a game where we have played that opponents have so many physically dominant tackles, where our opponents have carried in the manner that they did.

“It wasn’t a surprise to us. We knew with the side that was picked, we knew the power that they bring to the game. I laboured it to the guys last Wednesday but to contain those guys was difficult.”

We know of whom he speaks. Smiling Vunipola brothers in full health, Manu Tuilagi reborn, George Kruis and Maro Itoje each brought corrosive elements to this shuddering Test match to allow the twinkle toes of Henry Slade and Jonny May to eventually wriggle free.

It was as it has always been. Big men dominate the landscape, smaller creative souls add the watercolours.

Schmidt is a creative soul, just like Eddie Jones. Both of them realised the tactical importance of this meeting. Jones, despite coaching longer than many of these England players have lived, knew his reputation was on the line. To be outwitted by Schmidt, again, with all this power at his disposal, would have deeply wounded England and the Australian’s standing as a coach in 2019.

This being the only year that matters.

But the street-smarts of the 58-year-old Sydney kid rose above all else. Schmidt complained in the aftermath about Irish ball being slowed, he repeatedly mentioned the blocking of chasers after Conor Murray’s sky scrapers.

The officials failed to assist Ireland, Schmidt inferred, so Murray was forced to alter the usual up and under approach. It forced Ireland into an open war they could never expect to win.

The Springboks and All Blacks are watching.

“They slowed our ball down and enabled them to take pot shots and they took those shots well,” Schmidt continued. “When that happens you are forced to go to the air because it is the only way you can progress.

Jones will read these quotes and chuckle into his well earned beer.

Every team Ireland have vanquished these past few years have made similar complaints.

There’s more. Keith Earls was forced off at half-time after being smashed late by Tom Curry before Itoje’s knee to his midriff, while both men leaped, was deemed a penalty only by Jerome Garces.

“It got quite physical with Keith Earls. I don’t think that was necessarily part of the plan but it certainly put Keith out of the game. He was our most experienced back three player and it was pretty challenging to cover that space in behind. I thought they played to it really, really well.”

That sounds like mild criticism of Robbie Henshaw. Of course, Schmidt disagreed.

“I thought Robbie did a pretty good job. Keith was keen to run off the hip pointer but you can’t do that. Robbie almost had to double job. The volume of running he did I think he was as good as he could have been.

“They targeted the space in behind last year so we knew they were going to do that. You just need fully fit, ideally experienced guys . . . ”

Rob Kearney’s international career may be revived at Murrayfield next Saturday. Schmidt gave nothing away besides stating the need for every player to be versatile in Japan (he is now openly talking about the Six Nations as preparation for the World Cup). Kearney is not versatile. He is a fullback. The best 15 Ireland has ever known.

So, after Schmidt’s complaints were heard, he was asked if the officials had intervened in Ireland’s favour at the breakdown and penalised English blockers, would the result have been any difference?

“I’m not saying that at all. We have to come up with solutions for that. I would have anticipated a lot of that happening. We seen how they go about their business and they were open about how they were going to approach the game.

“When they get what they are looking for it is very difficult to change things. When we can’t attack through carry, because the ball is slow, and they are getting off the line at us, you have got to able to find that space in behind. When we couldn’t get access in the air it was difficult.

“We would have had double the penalties but we couldn’t get enough of our game going.

“I am frustrated that we do tend to start slow. Looking forward to the World Cup we do need to hit the ground running.”

He gives plenty of examples. But, later, Schmidt conceded that England are only going to improve as well.

What tonight proved above all else is the World Cup will return to these levels of brutality when English, South African and New Zealanders enter the field of play.

Schmidt knows that this night provided real warning. Physical inadequacy is the problem Irish rugby fears the most. Stander is joined by Earls and Devin Toner (ankle) on an updated wounded list.

Most of them can only rest before Murrayfield.

“Yeah, it is a reality check. That’s how it is going to be at the World Cup. England are literally a big team. It’s hard to take anything away from them. It was their simmering intensity, they were collectively livid which made it a suffocating pitch to be out on tonight.”