Being defending champions brings its own pressure for the Ireland's women

Winning the Six Nations hard enough, retaining it will be even harder 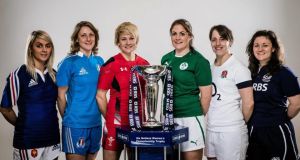 Retaining a title is always tougher than winning it for the first time, all the more so when it was an historic Grand Slam. Try as she might at yesterday’s Six Nations launch to insist they would be taking their defence one game at a time, the Ireland women’s rugby captain Fiona Coghlan couldn’t avoid the additional scrutiny that comes with being champions, nor the inevitable questions as to their ability to retain their title.

That said, she was clearly embracing the heightened expectation that has come with their new-found status. No less than posing centre stage with the trophy, it goes with the territory.

“Obviously there is pressure on us and more attention as well, but that’s something that we’ve wanted as well and something we’ve been striving for. So we’ll try to use it to our advantage, and it’s been getting more girls involved in the game. We want to win every game and bring back the trophy. Yeah, there’s challenges and obstacles, but that’s why this competition is so good.”

Prized scalps
Aside from being prized scalps, with all five opponents looking for revenge, chief amongst those obstacles is the bi-annual itinerary. “We’re away to France and we’re away to England, and we’ve never beaten them away from home, so they’ll be huge tasks, and then I’d say Wales will be coming over thinking they’ll get a scalp because we robbed the game off them last year.

“It’s hard to judge at the moment because we haven’t really played together in 10 months and we don’t know what other nations are doing either. It is hard in the women’s game to gauge it. But it’s going to be difficult; like any competition you go into it’s difficult to retain it.”

A new development, reflecting their new status, is that Ireland’s third home game, against Italy, will be held at the Aviva Stadium for the first time on March 14th after the conclusion of the men’s game, at 5pm.

“I played in Twickenham before the men’s game and in Murrayfield after the men’s game,” said The Irish Times sportswoman of the year, who said the latter was the more anti-climactic occasion.

“It was a little bit lonely. There was a huge crowd there for the start of the anthems but it was a cold night and then it emptied out.

Awareness
“We’re hoping now there’s more of an awareness out there of what we’re doing and that not alone will people stay but more people will come in for our game afterwards. The crowd might be a little bit lost there but I’m sure it will be vocal enough.

Only flanker Joy Neville, who came up with that vital turnover near the end of the Grand Slam-winning finale in Milan, has retired since last season.

The team have the same programme as the men, opening with home games against Scotland and Wales, in Ashbourne, on Friday, January 31st and Friday, February 7th, and Coghlan says they are well prepared.

New combinations
“We’ve had four weekends together and a game against Italy last weekend, so we’ve had lots of new combinations to look at, and there’s some exciting talent coming through.

“It’s all going well and we’ve another weekend this week and then into Scotland. We haven’t looked too far past Scotland at the moment. Kind of just going to take it game by game and hopefully hold on to the trophy at the end of it.”