Ian Madigan keeping his eye on the ball 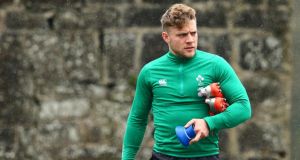 He is 26-years-old. By the time the next World Cup arrives he will be 30. There is no sense that Ian Madigan is panicking.

He is over the first selection hurdle, where Ian Keatley fell. But cold pragmatism creeps into his thinking. It’s the way Joe Schmidt would have it.

“It’s about getting on the bus,” he says.

Quite. The Irish team gathers on Sunday at Carton House, with the summer now stretching out like a shimmering land mass to be carefully traversed before the World Cup begins in September.

There’s another cull to come when 14 will be sent home. Then the squad of 31 will be on the plane. After that it’s how to get to the match 23. Numbers drive the players.

Madigan is neither surprised nor unsurprised by Keatley’s exclusion. The player who started at outhalf in Ireland’s successful Six Nations Championship may be out in the cold, but the tough programming of Schmidt has taught them nothing if not survival.

You roll with the punches, put your head into the wind and keep going. Keatley would do the same. Dominic Ryan too. Spilling emotion for the coach’s call on other players is not part of the professional creed.

“I don’t think all four [outhalves] can go and maybe all three can’t go. There might only be two.

“There have been certain guys who have been left out, like Dominic Ryan, that would have been a very close call. “There is no doubt there is going to be at least one player outside that group of 45 that will still go to the World Cup, either through guys getting injured during warm-up games or pre-season or certain guys losing form or word filtering through the provincial camps that certain guys are killing it in training and are invited into the squad. It’s important for the guys that they don’t lose faith.”

Madigan’s versatility could be seen as a double-edged sword. His plan is to become essential to Schmidt as a player, maybe someone who can offer him tempo changes in game and play across positions. Johnny Sexton and Paddy Jackson are specialist outhalves. He knows that and understands it would be foolish to go head to head with either.

The many who watch him play have absolute faith in his spark and willingness to push lines forward, back himself, and create.

But the challenge is to make that his speciality, put himself in a place where Schmidt cannot leave him out. He knows that getting to England and Wales is about becoming the most useful player for a set of circumstances that a tournament like the World Cup will throw up.

“At the end of the pre-season and the warm-up games, I’ll know that I’ll have been true to myself and trained as hard as I can, and if that means I’m the starting outhalf or it means I’m going back to Leinster and not going to the World Cup, I can still look myself in the eye and know that I’ve given it absolutely everything.”

He has had four weeks off since the game against the Barbarians. But the World Cup has begun to live with the players. It hasn’t been easy to switch off, although today, two days before entering the closed order in Kildare, Madigan has the distraction of promoting Caps to the Summit, a rugby climb up Carrantuohill to raise money for Africa.

The squad have four weeks training before the August friendly matches begin. But divorcing himself mentally has been more difficult.

There are challenges ahead and some he can’t control, like opportunity, injury and squad hierarchy. He goes in eyes wide open.

“I’ve had a few conversations with Joe,” he says.

“He’s made it clear what he expects from me for him to be able to pick me in the squad. I know that if I fall short of that, I won’t be in it.