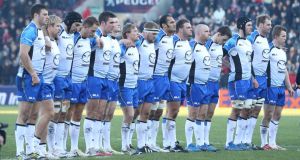 With all four Irish provinces winning on the weekend, it would be easy to get carried away. Connacht’s win was incredible, Leinster were as ruthless as we’ve ever seen them, Munster and Ulster were very professional in putting Perpignan and Treviso away. Everything looks rosy in the garden.

But when you give it a bit of thought, you have to ask yourself: “Are we really that good?” Before this season, a clean sweep for all four Irish provinces in the one weekend had only happened once. And even then, it was the final round of group games in last year’s competition when they were mostly playing teams that were out of the running for a quarter-final place.

Now it has happened twice in one season. In fact, it has happened twice in two rounds. And these are the early rounds when really important points are up for grabs and everything should be on the line. Away wins against Toulouse, Montpellier, Northampton and Zebre, home wins against Castres, Gloucester, Perpignan and Treviso. On the face of it, that’s a seriously impressive line-up.

But you have to wonder whether it’s a bit of a false dawn. How competitive is this year’s competition, really? Looking around at some of the teams involved this year, you just don’t see the same will to win that was there in other seasons. I think it’s fair to say that the Heineken Cup seems to flick a switch in the Irish teams that isn’t always the case elsewhere. That seems to be what’s happening this year anyway.

Connacht’s win in Toulouse was the result of the season, maybe the result of the decade. But it shouldn’t happen. Not when you consider the talent available to the two teams, the money, everything. And a team like Northampton should never be 0-26 down at home at half-time no matter how good the opposition are. Some teams just haven’t been going out with the right attitude.

Not just in the games involving Irish teams. One game that really stood out for me over the weekend was Harlequins against Racing Metro. The body language of some of the Racing players was atrocious at times. Some of them just didn’t look bothered. You look at someone like Juan Martin Hernandez, such a hugely talented player on his day, and yet he hardly seemed interested on Saturday.

He wasn’t the only one. Racing players were dropping the ball, not pushing themselves to get back and cover, falling off tackles, all the tell-tale signs. It was a great result for Harlequins but they beat a team who just didn’t put it in against them.

No intensity
You had to wonder if they cared. There was no intensity and they were disjointed throughout the game. Some of them looked like they didn’t want to be there. It comes down to individual attitude. There’s a lot of players there on huge salaries and this looked like they had no great interest in getting out of their comfort zone.

It was great to see that the club directors’ response to losing 8-32 was to pull their team out of the Stade de France for the Christmas fixture against Toulon. They were supposed to play a big Top 14 game there on December 29th but they announced on Monday morning that they were going to play the game in their own ground now instead. “In light of the result against Harlequins on Saturday this has forced us to accept we are not a part of the great teams of the moment,” they said. “The Stade de France is reserved for such teams and we do not belong there.”

Good for them. This is a team full of international superstars. How they can go out and put in a performance like that is beyond me. Maybe they’ll be brought back down to earth as a result.

After Saturday, I’d say there are a few in Northampton thinking along the same lines. This is a team full of guys who were big factors in the November internationals but they just looked like different players against Leinster. You would have imagined the likes of Tom Wood, Courtney Lawes, Dylan Hartley, George North and others would have enough quality and experience to put it up to Leinster.

We all know how good a side Leinster can be on their day and there’s no shame in getting beaten by them. But to get totally wiped on your own home patch is unacceptable. And for Tom Wood to come out afterwards and say they were shocked and embarrassed and that they were waiting on the final whistle is pretty amazing to hear.

Nice comfortable salaries
At least, that’s the way that the Irish teams approach it. But it’s hard to argue that everyone else has approached it like that this season. Some teams have had players who just weren’t pushing that pain threshold to a different level. There have been players who’ve looked happy with their lot, sitting on nice comfortable salaries and you look at them and think maybe fighting for the jersey isn’t that big a deal for everyone. Or maybe it’s just that fighting for the Heineken Cup isn’t that big a deal for them.

That doesn’t happen with the Irish provinces. Leinster sent out a team with 15 Irish starters against Northampton and blew them away. You could see that Northampton just expected things to happen for them without them doing the right things to make them happen.

We played there a few years ago with Munster and they hit us with everything, disrupted our rhythm, forced us into errors and beat us. So they knew what was expected of them and they still brought nothing to the table. Even allowing for Leinster playing the best 40 minutes of rugby we’ve seen from them in ages, Northampton were just so off the pace.

The ruthless streak that Leinster showed is what wins you this competition. They saw a weakness and piled in to exploit it. They stuck the foot on the accelerator and just smashed Northampton. It was really admirable and it bodes well for the future for Matt O’Connor’s side but we’re talking about the team that’s in second place in the English Premiership here. Seasoned internationals, guys who’ve been around. They don’t get hammered like that unless they go out with the wrong attitude.

On one level, part of you would have to suspect that they’re just not that pushed about the competition. As it stands, they’re not going to be playing in it next year so maybe it feels a bit diluted to them already. But then, if that’s the case, how do we explain Harlequins going to win in France or Leicester winning 41-32 against Montpellier?

I was at that game at Welford Road and I thought there was a real hunger in the ground for the Heineken Cup. I didn’t get the impression that people were only paying it lip service. Maybe that’s because there’s a great Heineken Cup history at the club but they were definitely throwing everything at that game.

But as we saw in Toulouse, having a great Heineken Cup history means nothing unless you go out and do what’s necessary. Nobody saw that performance coming from Connacht. None of us predicted it. They got tanked by Edinburgh the week before and we all assumed the same was going to happen here.

But what we saw from Connacht was a performance of real passion and fight. It wasn’t just stick-it-up-your-jumper stuff either – it was accurate, composed, clever rugby.

Fraction of intensity
It was an embarrassment to some of the other teams in Europe last weekend. Clubs with budgets that are multiples of what Connacht are able to spend went out and played with a fraction of the intensity or passion or accuracy.

The Heineken Cup means different things to different countries. We’ve known that for a long time. French teams have always struggled away because they don’t want to have success in Europe if it means failure at home. Certain English teams go hell for leather, others don’t. Irish teams see it as the best way to challenge themselves against the best players in Europe.

The way you judge any player is to ask yourself what are his motives. What is he trying to achieve? Is it to get to the next level of his career? Is it to win a particular trophy? Is it to test himself against the cream of the crop? Is it to earn a big salary? The answer will always be some combination of all four. For players in the Irish provinces, the Heineken Cup is the route to all four.

That’s not always the case in England and France. They come into the Heineken Cup weekends off the back of huge domestic games and they go straight back into them afterwards. Maybe they’ve just taken their eye off the ball a little at the wrong time this season.

And who knows? Maybe they will all get their act together this weekend. Professional pride will surely mean that the likes of Toulouse, Northampton, Racing and others won’t be so lackadaisical again. That’s the beauty of these back-to-back games in the Heineken Cup – there’s always next week to go and right the wrong.

I wouldn’t be putting a lot of money on another Irish clean sweep anyway.