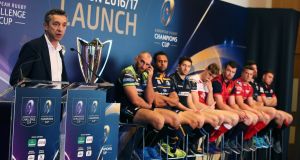 The organisers of the European Champions Cup will look to bring their flagship tournament back to terrestrial television in Ireland, albeit only from the 2019-20 season onwards and in a limited capacity, while selling rights to one pay-per-view broadcasting company rather than two.

This season’s tournament will be the third of the compromise five-year deal for broadcasting rights in Ireland and the UK, in which the ten pool games across each weekend are split between Sky Sports and BT Sport. The Director General of EPCR (European Professional Club Rugby) Vincent Gaillard accepts that this is an unsatisfactory arrangement.

This is particularly so in Ireland, where not only are viewers obliged to subscribe to both Sky Sports and BT Sports (via eirSport) but in many instances, such as those who subscribe to Virgin, no longer receive the former Setanta or BT channels that are now part of the eir Sport package.

“The tenders will be launched during the course of 2017, so I’m hoping that by the end of next year we will have new contracts in place and therefore effective as of 2019 onwards.”

“I think we will treat Ireland separately in what we’re going to do, but more free to air coverage in Ireland is where we would start. Early days again but that would certainly be an objective.”

The last ‘live’ game on Irish terrestrial television was RTE’s coverage of the 2006 final between Munster and Biarritz, after which they had rights to highlights until 2009.

However the current deal in France has further marginalised the European Champions Cup, as all ten games each weekend are on beIN Sports, whereas Canal+ has retained the rights to the Top 14, with just one Champions Cup and one Challenge Cup game free to air on France Television each weekend.

After last season’s final in Lyon for the final, this season’s finals will be held in Murrayfield. Expressions of interest in hosting the 2018 final have been received from both traditional and non-traditional rugby venues, with Gaillard revealing that EPCR are looking more toward the latter; specifically Italy and Spain.

“Italy is a place to start. Spain would be another one and there’s a couple more as well that could be of interest but it would be fair to say we’ll focus on those two first.”

The objective of five commercial partners has yet to happen, and entering the third season under EPCR, only former title sponsors Heineken (and for a much reduced level) and Turkish Airlines remain official partners.

Gaillard maintained that a third partner will be announced shortly, adding: “I’m pretty certain that within a year or possibly two we will have completed all five (partners), maybe six.”

As for last season’s Anglo-French carve-up of the knock-out stags in the Champions Cup, Gaillard said: “I certainly hope it will be broken. We definitely want to see the Irish provinces coming back strong. We want a truly European tournament. It’s in absolutely no-one’s interest for the competition to end up as a French or English (tournament).”

A reminder of Irish glory days will come in the shape of the only first round match to be shown free to air in France, namely Racing Metro hosting Munster on Sunday week in Paris, where Ronan O’Gara, the tournament’s all-time leading points scorer, part of the home coaching ticket.

“He knows what we’re about, knows what the club is about,” admitted Peter O’Mahony, who is line to make a first start in almost a year against Leinster at the Aviva on Saturday after coming through last week’s return cameo against Zebre unscathed.

“He is probably one of the reasons why I’m sitting here, why the club us where it is competing in Europe. The history we have, he had a big part to play in it. We certainly wouldn’t take anything away from what he has done.”

“He can give them an insight into what his group were about and what they stood for which is a huge part of what we stand for,” added O’Mahony, who recalled his European Cup debut was the night O’Gara kicked a match-winning drop goal deep into overtime against Northampton at Thomond Park in November 2011 after Munster went through 41 phases.

“But, we’ve a different group, a younger group, one that wants to stamp their authority on the Munster jersey over the next three or four years. We take a huge amount from our history. It is important to us. But, we’re going in a different direction and we want to make it our own direction.”

This season’s Champions Cup will feature of all four provinces, but this time Connacht have qualified on the back of their own Pro12 title success. Approaching Saturday week’s opener at home to Toulouse, that makes a difference for their captain John Muldoon.

“We’ve been here in the past and you’re trying to justify that you belong here and trying to say that we can dine at the top table, whereas when you qualify on your own merit you show that you deserve to be here through the results and everything you’ve done. It does make it easier coming up here.”