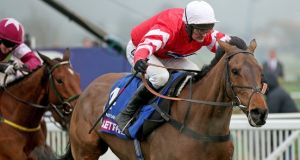 2015 Cheltenham Gold Cup winner Coneygree has been ruled out of the Kerry National due to the going. Photograph: Dan Sheridan/Inpho

Coneygree has been ruled out of Wednesday’s Guinness Kerry National due to testing conditions.

The 10-year-old became the first novice in 41 years to win the Cheltenham Gold Cup in 2015, but injuries have restricted him to just three competitive starts since then.

He ran a magnificent race in defeat when a close third in the Punchestown Gold Cup in April and connections were keen to see him make his seasonal reappearance at Listowel this week, but have been put off by the likely heavy ground.

Sara Bradstock, wife of trainer Mark, said: “He’s not going to Listowel. I’m very disappointed, but it is what it is.

“The ground is going to be very soft. We aimed towards the Kerry National thinking we’d get soft ground and now they’ve had two weeks of solid rain. We want it soft, but not that soft.

“Having galloped him on perfect ground and on the all-weather, the powers that be say it wouldn’t be good for his fragile legs to run him over three miles on bottomless ground under top-weight.

“I have no doubt he could win the Kerry National on soft ground, but what do we then leave behind at Listowel?”

Coneygree could instead return to Ireland for the JNwine.com Champion Chase at Down Royal on November 4th, or run in the Charlie Hall Chase at Wetherby on the same day.

“The revised plan is to give him a little bit of time off and then get him ready for wherever we get suitable ground,” Bradstock added.

“There’s the JNwine at Down Royal and the Charlie Hall at Wetherby. There are also open handicaps at places like Chepstow, but we’d rather go for something valuable if we can.

“We’d definitely like to get a run in sooner rather than later to hopefully put him spot-on for something like the Hennessy (Ladbrokes Gold Cup, Newbury).

“He feels amazing at the moment. I’m worryingly confident that the same engine is still there.”