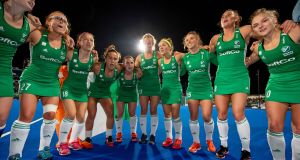 As the team will not be travelling they will therefore fall under the Hockey Ireland Covid-19 policy guidelines that were issued on Thursday. File photograph: ©INPHO/Morgan Treacy

The Irish women’s hockey team will no longer take part in a warm weather training camp in South Africa scheduled for next week. Having announced on Thursday night that the team would participate in the camp during which they would play matches against South Africa, England and China, a statement released on Friday said the decision had been reversed.

The trip was part of the team’s preparation for the Tokyo Olympic Games this summer with the conditions in South African expected to be not unlike those the team will face in Japan.

However, having monitored the situation over the previous weeks and given the escalation of measures being taken in Ireland to reduce the spread of Covid-19, Irish team management has taken the decision to cancel.

As the squad will no longer be travelling they will therefore fall under the Hockey Ireland Covid-19 policy guidelines which were issued on Thursday, which is no school or club hockey until the end of the month.

“After a robust and productive conversation with players and staff today, management have decided to cancel the Senior Women’s upcoming trip to Durban,” said Hockey Ireland performance director Adam Grainger.

“While it could be argued that the performance benefits still outweigh the risks of travelling to Durban, the concern expressed by players and staff combined with ‘Coronavirus unknowns’ made the decision to cancel this travel the best solution.

“This decision was not taken lightly, and Hockey Ireland would like to thank the squad for their patience on this matter. We will now review and seek to amend the programme plan for the squad for the next few weeks.”

All league and cup hockey on the island has been postponed as has European club competition in which Irish teams were involved.

All in the Game: It’s James not Bolt for Carlo Ancelotti 10:00
Liverpool’s win at Stamford Bridge felt like a Sadio Mané highlights reel 09:21
The Offload: Saracens prove Pro14 is not fit for purpose 09:00
Bryson DeChambeau’s ‘mad scientist’ muscle validated by US Open triumph 08:21
NFL round-up: Tom Brady earns first win with Tampa Bay Buccaneers 07:42
Here is your handy guide to sport on television this week