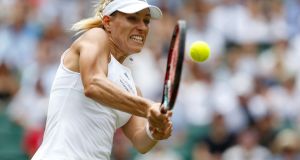 Angelique Kerber has spent more weeks on the top of women’s tennis than Venus Williams and Maria Sharapova combined – longer, in fact, than all but 11 players in history. But now, more than ever perhaps, the crown sits precariously on her head.

That much was obvious watching the number one seed stumble past Irina Falconi, a qualifier from the US who has never won a match in five attempts at Wimbledon and is ranked 247th in the world.

On the face of it a 6-4, 6-4 victory in 87 minutes might not sound like it gives much cause for concern. But this was not the Kerber of last year, slugging out the final with Serena Williams in a minor classic before gracefully accepting the runners-up trophy. Instead she spent much of the match groping for her range and rhythm. The good news is that she still has time to find it, but a second-round match against Belgium’s Kirsten Flipkens, who reached the semi-finals in 2013, looms.

“I think it will be another tough match,” Kerber said. “But I’m on my way to recapturing my form.”

Wimbledon tradition dictates that the defending singles champion begins the defence of her title on the first Tuesday. However with Williams expecting a first child, it was Kerber who was given the honour. The German has had a fitful year, and lost in the first round in Paris, but initially she played as if she had never been away from SW19 as she broke serve twice to go 3-0 up in the first set.

Yet suddenly and strangely, her forehands kept finding the net or going long. That gave Falconi confidence. She had already showed she had a lovely touch – a feathered volley to save a break point in the third game was rapturously applauded – but now she was winning games, too.

The American broke back and kept it close throughout the rest of the first set before going down 6-4 in 48 minutes – but it was telling that Kerber had hit only eight winners to 13 unforced errors.

The second set was also close but with it poised at 4-4, Falconi threw away her service game and Kerber needed no second invitation to wrap up the match.

Afterwards she admitted that the pressure of being number one for 33 weeks had not always been easy, but insisted her form is gradually returning.

“There is much more expectation, much more pressure, from me, from outside, from everything,” Kerber said. “You have much more things also to do. You have to learn. You have to get through all the things. In the last few months, I’ve had a few up and downs. But there’s also a lot of things that I’ve learned from.

“Right now I am trying to make things not too complicated again and I’m feeling good,” she added. “I have been practising good in the last few weeks since Paris. I will try to go out there on Thursday, find my rhythm, and enjoy playing on grass. This is what I love.”

She knows, however, that she has 1,300 ranking points to defend at Wimbledon. So unless she makes the latter stages she is likely to lose the top spot to the Czech player Karolina Pliskova or the Romanian Simona Halep. On this evidence, at least, the clock is ticking loudly.