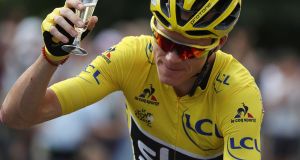 Team Sky rider Chris Froome: “My hunger to win hasn’t got any less but the challenge is bigger this year because the level of my rivals is higher.” Photograph: Kenzo Tribouillard/Reuters

He was the dominant winner in 2013, 2015 and 2016 but, this time around, Chris Froome starts the Tour de France knowing things could be more difficult. The Briton has had a quiet year thus far this season, having just two top-three stage results to his name and no victories.

Second on stage five of the Volta a Catalunya in March is the closest he has gone to spraying the Champagne, a clear difference to other years.

Even so, he was bigging up his chances in this week’s Team Sky press conference in Dusseldorf. “In terms of form, I feel I’m exactly where I need to be,” he said. “At the [Critérium du] Dauphiné, I got the race rhythm I needed. I’m light on race days so I feel fresher than I have ever been before at the start of the Tour de France. I’m ready for the next three weeks.

“My hunger to win hasn’t got any less but the challenge is bigger this year because the level of my rivals is higher. If Richie [Porte] is as strong as at the Dauphiné, he’s going to be the man to beat. I haven’t won a race yet this year but I can take confidence from the three wins I already got at the Tour.”

Former team-mate and current friend Porte finished fifth overall last year, his best-ever Tour performance, but would likely have been second in Paris had he not punctured on stage two. The BMC Racing Team rider has been in fine form in 2017, winning the Santos Tour Down Under and the Tour de Romandie and netting second overall in the Dauphiné. He was the strongest rider there but lost out when the other contenders ganged up on him on the last day. He will be aided by Nicolas Roche, Ireland’s second rider in the event.

Nairo Quintana’s form is a little less certain by virtue of the fact that he rode the Giro d’Italia. Ever since Marco Pantani did the double in 1998, aiming to win both races has meant that the riders concerned are weaker in the Tour. However, Quintana (Movistar), who has finished second, second and third overall in the race, still believes he can contend for yellow. In fact, his team coach says that he has hit his best ever power numbers in training.

Like Froome, Alberto Contador (Trek-Segafredo) is another multiple winner in the race. Although his victories are as far back as 2007 and 2009, he has staked everything on winning one more title, and is peaking specifically for the Tour.

Those four aside, a number of others will be closely watched. These include last year’s runner-up Romain Bardet (Ag2r La Mondiale), 2015 Vuelta a España champion Fabio Aru and Dauphiné winner Jakob Fuglsang (both Astana). Ireland’s Dan Martin should also be one of the race’s big animators.

As Martin notes, this year’s route is quite different to recent years. It features many new climbs and will visit all five of the mountain regions in France, beginning with the Vosges and Jura, then tackling the Pyrenees, the Massif Central and the Alps. There will be just three summit finishes, with other mountain stages ending in the kind of descents that riders like Bardet will likely relish.

The race begins on Saturday with a 14km time trial in Düsseldorf, Germany. Stage three to Longwy and stage five to La Planche des Belles Filles feature uphill finishes, but stage eight to the Station des Rousses, stage nine to Chambéry, stage 12 to Peyragudes, stage 13 to Foix, stage 15 to Le Puy-en-Velay, stage 17 to Serre Chevalier and stage 18 to the summit finish of the Col d’Izoard may end up being more decisive mountain days. The penultimate day time trial in Marseille will also be crucial.

As for the sprinters and breakaway riders, nine flatter stages will suit those chasing their own ambitions, including British sprinter Mark Cavendish (Team Dimension Data). Although he has had a difficult season due to an ankle injury and then the fatigue of the Epstein-Barr virus, he appears to be recovering and is vying to add to his remarkable 30 sprint stage wins in the race.