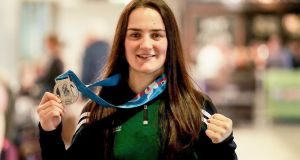 Kellie Harrington with her silver medal she won at the World Boxing Championships in Kazakhstan last month. Photograph: Donall Farmer/Inpho.

For most of us Kellie Harrington was an unknown before she set sail for the World Boxing Championships in Kazakhstan last month, her success there yielding not just a silver medal but also the telling of her sporting story, one that made her achievement at the tournament all the more remarkable and more than a little inspirational.

Harrington had been boxing for a decade, the bulk of that time as a member of Glasnevin Boxing Club, most of it under the guidance of coach Jimmy Halpin, but for a couple of years before that, when her club didn’t allow girls to join up, she was sparring with shadows in a neighbour’s shed.

Even after she was admitted to the club it was hardly plain sailing, Halpin recently speaking about having to twice talk her out of retirement, Harrington finding the need to combine two jobs - she is a fitness instructor and personal trainer and also works at St Vincent’s Psychiatric Hospital in Fairview - with training an enormous strain, a lack of self-belief also making her question her commitment to her sport.

By the time that silver medal was place around her neck, the 26-year-old concluded that all of those efforts had been worthwhile and was already targeting gold at November’s European Championships in Bulgaria.

She is, of course, unfortunate enough to be in a weight division that does not yet feature in the Olympic Games, but longer term her ambition is to fight at the 2020 Games, hopeful that talk of two more divisions being added to the women’s programme for Tokyo will be realised.

And after Kazakhstan, she feels anything is possible, the Dubliner having entered the tournament unseeded and with little international experience, but going on to beat Lithuania’s Austeja Auciute, Germany’s Cindy Rogge, home favourite Zarina Tsoloyeva and Canada’s Sara Kali before losing to China’s Asian champion Wenlu Yang in the light-welterweight final. Even then she went down, literally, fighting, Wenlu taking the contest 2-0 but with one judge voting it a draw. As World Championship debuts go, it was an impressive one. As Harrington put it, “to get to a final from being . . . a nobody”.

Her hope now, having had to pay her own way through her career, is that funding from Sport Ireland will ease the strain and allow her focus more fully on her boxing. It would, she said, help her “change the colour of that medal I just got. The silver, that will push me even more. It will push me even more so I can come back and get that gold.”

It’s been some journey from that neighbour’s shed, and there’s plenty more to come.

January: Aine McKenna (Basketball). The Kerry woman won the Most Valuable Player award for her performance in the National Cup final when she captained Glanmire club Team Montenotte in their outstanding 96-64 victory over Killester.

February: Ciara Mageean (Athletics). On the comeback trail from a serious ankle problem, the runner from Portaferry, Co Down has had a hugely encouraging few months, securing Olympic qualification and then, in February, breaking two Irish indoor records, the 1,500m and the mile, one 16 years old, the other seven.

March: Nina Carberry (Horse Racing). For the second year running Carberry won the Foxhunter Chase at Cheltenham on the Enda Bolger-trained On The Fringe, making it three victories in the race in all, and six career victories at The Festival.

April: Ellis O’Reilly (Gymnastics). The 18-year-old will become the first woman to represent Ireland in gymnastics at the Olympic Games this summer after she qualified through the test event in Rio in April.