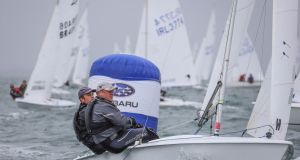 Ireland’s bid for its first-ever world title in the International Flying Fifteen class gets underway on Dublin Bay this morning in an 80-boat fleet which includes representatives from nine countries.

The scale of the task for Ireland, however, was demonstrated on Wednesday when a dominant British team showed the depth of their ambition by taking nine of the top ten places at a pre-World Championship event on the same race course.

Whether it is a sign of things to come or Irish competitors are keeping their powder dry remains to be seen, but the Ovington Boats entry sailed by Nathan Batchelor and Richard Riggs from Tynemouth took first overall in impressive style on Wednesday. The duo outwitted several expected top performers including the doyen of the 20-foot keelboat class, Steve Goacher from Cumbria.

After five races sailed in shifting north westerlies on the World Championship race track, sailmakers Richard Lovering and Matt Alvarado of Hayling Island Sailing Club were runners-up in this week’s affair in blustery conditions that turned out to be quite a contrast to the calm which prevailed when it last sailed on the Bay 16 years ago.

Although they won last year’s 33-boat Flying Fifteen Irish National Championships with a race to spare, top local hopes David Gorman and Chris Doorly of the host club (who also took a creditable fourth overall at the 2018 British Nationals) could only manage 12th overall in the 55-boat warm-up.

But, as of Friday morning, the slate is wiped clean as the 12-race Subaru-sponsored World Championships begin at lunchtime with a significant 78-boat fleet.

The fleet is drawn from nine countries, but as late as Wednesday it was not clear if all nine would make the deadline.

But following an appeal by the NYC to the Minister for Sport Shane Ross, three Hong Kong team boats shipped specially for the two-week event have been released from customs at Dublin Port. The trio missed the pre-worlds fixture but will set sail on Friday. Racing continues until next Friday, September 13th.

Two Irish sportsboat titles were won convincingly in Dublin and Baltimore last weekend. The Stefan Hyde-steered Bád Kilcullen with crew Jimmy Dowling, and Kieran Dorgan of the Royal Irish Yacht Club took the SB20 National Championships on home waters after leading for the entirety of the eight-race series.

From an entry of 20 boats, 15 contested the Dubarry-sponsored title on Dublin Bay.

This weekend’s Elmo Cup Team Racing event for U18s at the Royal St. George Yacht Club in Dun Laoghaire will benefit from the club’s recent arrival of a new fleet of green and yellow Fireflies.

Now in its fifth year, this Dun Laoghaire Harbour-based event has been hugely successful at encouraging team racing among school-aged sailors, giving them valuable experience before moving on to college sailing.

Entries are expected in from teams from Northern Ireland, RCYC, the Laser and 420 classes and the host club itself.