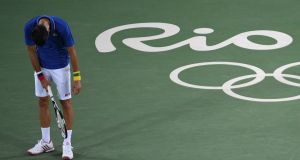 Novak Djokovic was knocked out of the men’s singles in Rio by Juan Martín del Potro. Photograph: Afp

Novak Djokovic, the world’s dominant tennis player, had made the Olympic gold medal in singles one of his big priorities for 2016.

He could not make it past the first round, and when it was over, both he and his conqueror, Juan Martín del Potro, were in tears on court for very different reasons in Rio de Janeiro.

Del Potro, the towering Argentine with thunder in his forehand, has had more than his share of setbacks, including multiple wrist operations that have knocked him repeatedly out of the top tier of the men’s game.

He even considered retirement at the end of last season because of his slow recovery from his latest operation. But on Sunday night, in a raucous and pro-Djokovic atmosphere on center court at the Olympic Tennis Center, he produced one of the most remarkable performances of his career: upsetting Djokovic, 7-6 (4), 7-6 (2).

“At the decisive moments, he just came up with some extraordinary tennis, and I have to congratulate him,” said the top-seeded Djokovic. “It’s obviously very sad and disappointing on my side to go out in a tournament this early, but on the other hand, I’m glad a good friend of mine, and somebody who has struggled a lot the last couple years with injuries, is back and plays at this level.”

Djokovic still has a chance for a gold medal in doubles, but the Olympic singles gold — the one major tennis prize he lacks — continues to elude him (and Serbia). Del Potro also beat Djokovic at the 2012 London Olympics, depriving him of the bronze medal in singles.

“I think this victory, it’s more big for me because I know my present,” del Potro said. “I know how tough it was to come back in tennis after my third surgery on the wrist, and I think I played one of the best matches of my career.”

After winning the French Open for the first time in June, Djokovic held all four of the Grand Slam singles titles. There was talk of a Golden Slam: all four major titles plus the Olympics in the same calendar year.

Only Steffi Graf has managed it, in 1988, when Olympic tennis returned to the five-ring fold in Seoul, South Korea, as a full medal sport.

But Djokovic’s season has taken a sharp turn in a southerly direction since that breakthrough victory in Paris in June. He was upset in the third round of Wimbledon by the American Sam Querrey.

Now, he has been beaten in the first round for the first time at any tournament since the Brisbane event in 2009, when he was beaten by Ernests Gulbis. (After getting a first-round bye this year in Monte Carlo, Djokovic was also upset by Jiri Vesely in his opening match.)

But neither of those two early defeats stung like Sunday night’s, and though Djokovic sportingly gave del Potro a congratulatory and extended hug at the net after his defeat, he was soon sobbing as he walked off the court.

“No doubt it’s one of the toughest losses in my life, in my career,” he said. “It’s not easy to handle, especially now just after the match, the wounds are sill fresh. But, you know, you have to deal with it. It’s not the first or the last time I’m losing a tennis match, but Olympic Games, yeah, it’s completely different.”

The unseeded del Potro did not allow Djokovic — the world’s premier returner — a single break point in the match and produced 41 winners (33 with his forehand) to 24 unforced errors: quite a strike rate for someone who was pounding the ball with such aggression.

“I hit my forehand as hard as I can, and I made a lot of winners, and I served well and my backhand was O.K.,” del Potro said.

The backhand has been the big question mark for del Potro in his latest comeback. He had the game and the big-match temperament to be part of the exclusive men’s tennis club known as the Big Four. In 2009, he upset Roger Federer to win the United States Open at age 20. But after three operations on his left wrist, he was no longer able to hit his two-handed backhand with the same power or confidence. He has, as a consequence, improved his one-handed slice, which was evident on Sunday.

The mystery was why Djokovic kept hitting to del Potro’s forehand when he pushed forward. Not surprisingly, he paid a heavy price, particularly in the second-set tiebreaker when del Potro nailed consecutive passing shot winners on the stretch to take an early 3-0 lead, which soon became a 5-0 lead and then victory.

It was also a reassuring day for Rafael Nadal, the Spanish star who returned after a two-and-a-half-month layoff because of an injured left wrist. Nadal, with his left wrist taped, defeated Federico Delbonis of Argentina, 6-1, 6-1, in the first round.

Nadal withdrew from the French Open during the event in May because of his wrist and made it clear that he would not have decided to play so soon if this were not the Olympics. He won the singles gold medal in 2008 but missed the 2012 London Games because of knee problems.

“If this were any other and I mean any other normal tournament, I would not be here to compete because the wrist is not perfect,” he said. “I don’t feel 100 percent. I need a bit more time.”

But he at least is still a contender in Rio.

The top seeds in both men’s doubles and women’s doubles were also beaten in the first round on Sunday. Venus and Serena Williams lost for the first time ever at the Olympics, falling by 6-3, 6-4 in the women’s doubles to the Czech team of Barbora Strycova and Lucie Safarova. Pierre-Hugues Hubert and Nicolas Mahut of France were beaten, 7-6 (4), 6-3, by Juan-Sebastián Cabal and Robert Farah of Colombia.

Only Serena Williams, the No. 1 seed in the women’s singles, managed to buck the trend, fighting off the quick and eager young Australian Daria Gavrilova, 6-4, 6-2, in a first-round match that featured many extended exchanges, including one extraordinary rally late in the first set that left both women hunched forward, leaning on their rackets and gasping for air.

High winds had postponed play on the outside courts earlier in the day, but there were still plenty of gusts during the Williams-Gavrilova match. And the slow hardcourt and humid conditions only made it tougher to hit a clean winner.

“They are slow,” Serena Williams said of the courts. “But it’s fine. I’m used to clay. I’m pretty good on clay, so I’m O.K. with slow courts. In fact, I think it helps me out.”

But it would not be an all-conquering day for the Williams sisters. They won the gold medal in 2000, 2008 and 2012, but Sunday’s surprise defeat put an end to their perfect Olympic record and came against a team that had never won a match together.

Strycova was not even originally scheduled to play doubles with Safarova in Rio but they joined forces after Karolina Pliskova withdrew from the Games. They had lost their only previous match together playing Fed Cup for the Czech Republic, but both are experienced doubles players who have had success with other partners. Safarova won the Australian Open and French Open titles in 2015 with the American Bethanie Mattek-Sands.

On Sunday, she and Strycova held very firm down the stretch. They broke Venus Williams at 4-4 in the second set, and Strycova then served out the victory.

The quick exit was a major blow to the sisters, who had played little together since winning the gold medal in London but who joined forces regularly in recent months in an attempt to get ready for Rio.

When they won the Wimbledon doubles title in July, it appeared they were in position to contend for another gold medal. But Venus Williams, 36, has not been in top form in Rio, fighting an illness. On Saturday night, she lost in the first round in singles to Kirsten Flipkens of Belgium, and on Sunday, she was coughing on changeovers.

“Today was not our best day as a team,” Venus said. “We like to have a chance to play into the tournament. We just played a tough team. We wish them the best of luck in the rest of the event, and we’ll get ready for the U.S. Open in doubles.”

Asked how she was feeling, she did not answer the question. But in light of the Williams’ sisters ages (Serena is 34), this was most likely their final Olympic doubles match together, although Serena could now choose to play mixed doubles here with either Jack Sock or Rajeev Ram. The mixed doubles field will not be confirmed until Tuesday in Rio.

“I know her,” said her coach Patrick Mouratoglou. “She’s quite capable of deciding to play in the mixed, as well.”