Record entry set for Round Ireland as world races cancelled 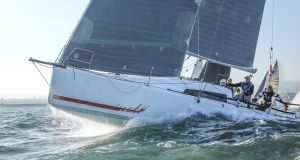 The Jeanneau Sun Fast 3600 Hot Cookie from the National Yacht Club in Dún Laoghaire is the latest entry into June’s Round Ireland Race from Wicklow. Photograph: David O’Brien

June’s Round Ireland yacht race is living up to its record billing. With 40 boats now entered, news of an offshore trial to be incorporated, plus a slew of international entries, it all means Wicklow Sailing Club is set for a bumper 21st race.

The trial for Irish entry into the 2020 Offshore World Championships will now be raced as part of the SSE Renewables-sponsored race instead of next week’s little-known plan to stage the trials in France.

The prospect of a race within a race adds heft to Ireland’s classic offshore and comes in a week when Wicklow organisers reported a buoyant 40 entries, a full 13 weeks before the June 20th start.

It might be one of few sailing fixtures to steer clear of coronavirus outbreak measures too. The race does not involve a mass gathering ashore, but what chance an eight-strong crew on a 35-footer over 700 miles in five days has of complying with social distancing rules is still anyone’s guess.

The 2020 Offshore World Championships is taking place in Valletta, Malta as part of the Rolex Middle Sea Race from October 10th to 22nd. Ireland has already secured an entry into the mixed two-person event (one male and one female), which is a new event for the 2024 Olympic Games in Paris. Plans were afoot to race a trial next week at the Solo Concarneau Trophée Guy Cotten regatta but were scrapped over Covid-19 concerns.

Now, it looks like the Round Ireland will be the basis of a home-based trial for three as-of-yet unconfirmed teams.

And, in further positive news for the race, the prospect of some potent international entries adds substance to Wicklow claims that this special anniversary could feature a record entry. That’s quite an achievement given this year’s fixture list is packed with rival offshores.

The much-rumoured entry of the great French offshore Teasing Machine plus the entry of a JPK 10.30 has the potential to make this an extraordinary international race indeed.

The latest entry received is Dublin Bay’s Jeanneau Sun Fast 3600 Hot Cookie. The National Yacht Club’s John O’Gorman skippered this new design to third overall in the 2019 Dún Laoghaire to Dingle Race so it is yet another prospect for the Round Ireland’s overall IRC prize.

As the majority of world yachting fixtures are cancelled, the Clipper Round the World Race 2019-20 was scrubbed with immediate effect this week. The race, which was due to visit Lough Foyle in Derry this summer, is currently in quarantine in Subic Bay, Philippines, where the fleet has been berthed since last Sunday. The Clipper boats were due to race across the North Pacific Ocean from March 21st towards Seattle before coming to Ireland.

1 New PGA Tour schedule could bring an end to the year like no other
2 Proposals for an annual Club World Cup seem fanciful at best
3 Ken Early: Mick McCarthy II was no blockbuster, more of a flop
4 Cigala caught in the crash as cycling’s Zwift League series heats up
5 The Offload: Roll up for rugby’s very own horror film
Real news has value SUBSCRIBE