Noelle Lenihan is sportswoman of the month for October 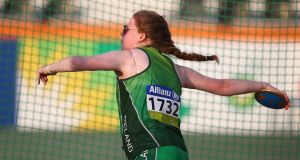 Noelle Lenihan was second on her debut at World Championships. Photograph by Francois Nel/Getty Images.

As medal hauls go, the one the Irish team brought back from the Paralympic Athletics World Championships in Doha, Qatar, last month was an impressive one, between them the nine athletes collecting three gold, one silver and three bronze medals.

While Michael McKillop and Jason Smyth contributed gold to the collection, McKillop winning the 800 and 1500 metres and Smyth taking yet another 100m title, the six women on the team – Orla Barry, Deirdre Mongan and World Championship debutantes Noelle Lenihan, Niamh McCarthy, Lorraine Regan and Hayley Fitzsimons – all had trips to remember too.

Cork women Barry and McCarthy both took bronze in the discus, while Mongan, the Galwegian now living in Down, also finished third in the shot put.

Offaly’s Regan, meanwhile, debuted with a ninth place finish in the javelin, and Waterford’s Fitzsimons registered a personal best to come fifth in the shot put.

She was beaten to gold in the end by F37 Paralympic champion Na Mi of China, but silver was a wonderful reward, for her and her coach – who happens to be her father Jim.

Irish paralympic coach Dave Sweeney was astonished by Lenihan’s cool, “she was like a seasoned pro out there,” he said. “I can’t believe how well Noelle handled the pressure of competing at this level.

“Even after breaking the world record she remained focused on the small details that we agreed would make her throw well.

“At 15 years old she has an incredible future in this sport. Hopefully they’ll have some great celebrations in North Cork Athletics Club.”

Lenihan, who has Cerebral Palsy, was elated – and already planning ahead as soon as that medal was placed around her neck.

“I got a PB, world record and silver medal in my first major championship,” she said.

“I’m going to gain more experience and improve my explosive power which can only result in further improvement.”

An outstanding debut in a major championship. There is lots more, on suspects, to come.

1 Ireland v Scotland: Doris’ day as Caelan set for first cap
2 Gary Lineker: ‘60 is just a number, 70 is the one to worry about’
3 Six Nations: Pundits, journalists and players have their say
4 Kobe Bryant obituary: A transcendent, if enigmatic, superstar
5 The Offload: Doris, Kelleher and Cooney to give Ireland a new look
Real news has value SUBSCRIBE