New York and Berlin marathons cancelled due to coronavirus pandemic 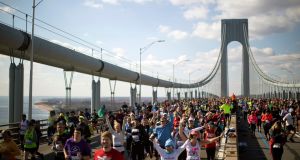 The New York City and Berlin marathons have been cancelled due to the coronavirus pandemic, organisers have announced.

The New York race, which had been due to take place on November 1st, has been called off “due to coronavirus-related health and safety concerns for runners, spectators, volunteers, staff, and the many partners and communities that support the event”.

“Cancelling this year’s TCS New York City Marathon is incredibly disappointing for everyone involved, but it was clearly the course we needed to follow from a health and safety perspective,” NYRR chief executive Michael Capiraso said in a statement.

The 26.2-mile race (42km), which traverses all five boroughs of the city had 53,640 finishers in 2019, the biggest in the world in terms of participation. It is always a popular race for Irish runners.

It means that three of the six marathon majors have been cancelled this year due after the organisers of the Berlin run, scheduled for the end of September, said in a statement on Wednesday: “Fun, joy, health and success are attributes that characterise the BMW Berlin Marathon, but we are not able to guarantee all of this at the moment. Your health, as well as all of our health, is our first priority.”

The Boston Marathon, originally due to be held in April and then postponed until September, was cancelled for the first time in its history.

The Tokyo Marathon went ahead on March 1st with elite runners only, London was postponed to October 4th from April 26th. The Chicago Marathon has not announced any changes to their scheduled event in October.