Defending champions have won their last 16 games in T20 qualifier 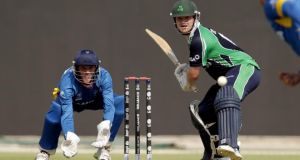 Ireland go into today’s World Twenty20 semi-final against the United Arab Emirates on the back of a 16-game winning streak in the qualifying competition stretching back to the first game of last year’s event.

It’s one they have no intention of losing as they face the hosts for the second time, having won a low-scoring encounter by five runs in the group stages.

In many respects the pressure is off Phil Simmons’s side, having won Group A to qualify for the finals in Bangladesh next March.

This Ireland team, though, pride themselves on their dominance at Associate level and are looking to defend the title they won last year in Dubai and thus take the top seeding into the finals.

Paul Stirling (above) starred with the bat as Ireland beat Afghanistan in last year’s decider in Dubai, his knock of 79 off just 38 balls helping seal a five-wicket victory at the Dubai International Stadium.

Despite a half-century in the opening win over Namibia, Stirling has been somewhat overshadowed by fellow opening batsman and Irish captain William Porterfield in the group stages until the final game against Hong Kong.

The 23-year-old Middlesex player hit 77 off 46 balls in Ireland’s mammoth total of 207 for four and followed it up by taking four wickets for just 10 runs as Ireland won by 85 runs.

Indeed with Ireland’s batting strength, Stirling has made a bigger contribution with the ball in hand and leads the Irish wicket-taking stats with 10.

Vital partnership
The off-spinner has formed a vital partnership with left-armer George Dockrell in this competition, with the spin twins taking 18 wickets between them in the last four matches, while each achieving an economy rate of less that five and a half runs an over.

Coming together after the six-over batting powerplay, Stirling and Dockrell have strangled the life out of the opposition on slow and low tracks that have seen plenty of action during the tournament.

Backed up by some brilliant catching amongst the Ireland ranks, it has made up for a potent mix for the defending champions.

Ireland will also have to deal with plenty of spin from their opponents under the lights at the Sheikh Zayed Stadium tonight, the first game to be played in the evening during the tournament.

And Stirling expects another tough encounter against a UAE team who sealed a place in the World Twenty20 finals for the first time with a 10-run victory over the Netherlands at at the stadium on Wednesday.

“We had a really tough game against them in the group stages, when TJ (Trent Johnston) bowled a super final over, to get us over the line. The pitches out here obviously are low and slow, but we’ve adapted well to them, and posted some high scores, especially in the stadium.”

Ireland are likely to remain unchanged from the victory over Hong Kong, with James Shannon keeping Niall O’Brien out of the side to give Ireland a third spinning option.

The 23-year-old Instonians player struck with his first delivery in international cricket to finish the game and also took two magnificent catches off Stirling’s bowling.

Ireland will also look to use the vast playing area at the Sheikh Zayed to score runs against a UAE side that have struggled with their ground fielding in the past.

Having also beaten their opponents in a T20 encounter back in March, Ireland are well set to make it a hat-trick today and claim a third straight visit to the qualifier final.