Husband and wife medal for Russia in Sochi 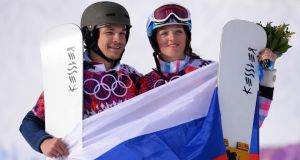 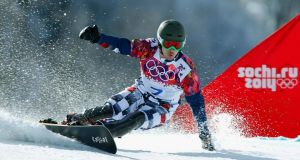 Patrizia Kummer’s victory over Tomoka Takeuchi of Japan in the women’s final to win gold for Switzerland was inevitably overshadowed as a partisan crowd celebrated Russia’s first snowboard Olympic title.

As “Good Vibrations” played over the loud speakers following his win over Swiss Nevin Galmarini, Wild wrapped himself in a Russian flag handed to him by Zavarzina.

“It’s incredible to win it along with Alena, for us to both have success on the same day is truly incredible,” Wild told reporters. “I don’t know how this happened, it’s too good to be true, I might wake up soon. It feels like a dream.”

Wild, who was born in Washington State but changed allegiance to Russia in 2011 after marrying Zavarzina, trailed Galmarini after the first run of the final but edged ahead in the second and claimed victory when the Swiss slipped.

“I’m so stoked to win it for Russia, those people out there were rooting so hard, it feels awesome,” Wild added. “Russia is the country that’s given me the opportunity to win a medal. If I was still riding for the USA, I’d be back home with perhaps some mediocre job doing something mediocre.”

Kummer, the gold medal favourite, benefited from a more dramatic fall from Takeuchi in the second run of the women’s final and celebrated a commanding victory by jumping into the crowd to embrace her coaches. Zavarzina had won the first medal of day, riding a wave of noise to a ‘small final’ victory over Austria’s Ina Meschik under picture-perfect blue skies at the Extreme Park.

Zan Kosir then recorded a convincing victory over German Patrick Bussler in the men’s small final to claim his bronze medal - a first for Slovenia - and the stage was set for Wild to bring the event to a climax. The 27-year-old had been in blistering form all day, second in qualifying and scything through the snow and around the flags to win all of his heats convincingly.

Galmarini, who beat Austrian favourite Karl Benjamin in the round of 16, had been in good form too, however, and took full advantage when Wild delivered his first ragged performance in the first run of the final. Trailing by half a second going into the second, Wild slammed his fists into his chest before charging out of the gate, quickly making up the deficit before steaming to victory amid deafening noise.

Zavarzina was unable to see his run and had to check with the media before discovering that there was an Olympic champion in the family.

“He deserves it, he’s worked so hard,” she said. “He’s so far from his home town and he had to switch countries. He has to deal with the Russian mentality, with stuff he’s not used to, working with people who don’t understand him most of the time. I’m very happy. I’m going to cry right now.”