Green Bay and Buffalo march on to championship games 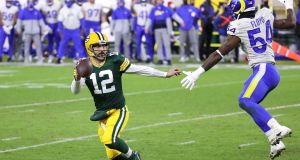 Aaron Rodgers of the Green Bay Packers runs against Leonard Floyd of the Los Angeles Rams for a one-yard touchdown in the second quarter of the NFC Divisional playoff game at Lambeau Field in Green Bay, Wisconsin. Photograph: Dylan Buell/Getty Images

In a match-up of the NFL’s top-ranked offense and defence, it was Green Bay’s offense that carried the day.

Rolling up 484 total yards and scoring on their first five possessions on Saturday, the top-seeded Packers advanced to the NFC Championship game with a 32-18 victory over the visiting Los Angeles Rams.

Green Bay will host either Tampa Bay or New Orleans, who play Sunday in New Orleans, on January 24th with a spot in the Super Bowl at stake.

Quarterback Aaron Rodgers completed 23 of 36 passes for 296 yards and two touchdowns, finding Allen Lazard for the game-sealing 58-yard score off play-action with 6:52 left in the game. Rodgers earlier scored on a one-yard run as Green Bay controlled the ball for 36:12.

“It’s all about the offensive line,” he said. “I was barely touched all night. [The Rams] have some really good players on that side of the ball and they were non-factors. Guys made plays and we had some off-schedule stuff that worked, but the run game was key.”

The Packers collected 188 yards on the ground, getting 99 on 14 carries from Aaron Jones. It was Jones’s 60-yard gallop on the first play of the second half that set up his one-yard plunge to make it a 25-10 game less than three minutes into the third quarter.

The sixth-seeded Rams drew within 25-18 at 1:41 of the third on Cam Akers’s powerful 7-yard run and a two-point conversion but couldn’t produce the equalizer. They gained just 244 total yards.

Jared Goff hit 21 of 27 passes for 174 yards and a touchdown for Los Angeles. Goff, playing with a thumb injury that kept him out of the starting line-up for last week’s wildcard win in Seattle, absorbed four sacks.

“You could see why they’re the one seed,” said Rams coach Sean McVay. “When you reflect on the game, there was a lot of back and forth, great plays on both sides. We had opportunities to sustain drives and get momentum going and couldn’t do it. That stings.”

Mason Crosby’s 24-yard field goal with 8:39 left in the first quarter initiated scoring. After Matt Gay drilled a 37-yarder just over four minutes later for the Rams, the Packers chewed up nearly eight minutes on a drive that ended with Rodgers’s one-yard touchdown pass to Davante Adams.

Rodgers capped the next march with a one-yard run, using a pump fake to get Leonard Floyd out of position for the tackle to make it 16-3 with 3:29 remaining in the half. Los Angeles pulled within 16-10 on Goff’s four-yard scoring strike to Van Jefferson 29 seconds before half-time.

But Green Bay came up with the half’s last word, driving 54 yards to set up Crosby for a 39-yard field goal as time expired to give it a 19-10 advantage at the break.

Taron Johnson matched the NFL post-season record with a 101-yard interception return for a touchdown as the Buffalo Bills delivered a 17-3 victory over the Baltimore Ravens in an AFC divisional playoff game on a windy Saturday night.

Josh Allen passed for 206 yards and one score, Stefon Diggs caught a touchdown pass and Jerry Hughes recorded two sacks as the Bills’ defence held the Baltimore offense out of the end zone as the franchise qualified for the AFC championship game for the first time since the 1993 season.

Second-seeded Buffalo will play either the Kansas City Chiefs or Cleveland Browns in the AFC title game on January 24th. The Chiefs and Browns meet in Kansas City on Sunday.

Ravens quarterback Lamar Jackson suffered a concussion on the final play of the third quarter and missed the rest of the contest.

Jackson completed 14 of 24 passes for 162 yards and the costly interception by Johnson. Jackson was bottled up as a runner and had just 34 yards on nine carries.

The fifth-seeded Ravens were in position to tie the score late in the third quarter as Jackson dropped back to pass on third-and-goal from the Bills’ nine-yard line. But he forced a throw toward well-covered Mark Andrews in the middle of the field and Johnson intercepted the pass and raced the length of the field to give Buffalo a 17-3 lead with 41 seconds left in the stanza.

The 101-yard return matched the record set by George Teague of the Green Bay Packers against the Detroit Lions in an NFC wild-card game in 1994.

On the Ravens next possession, Jackson was injured after chasing a poor snap by centre Patrick Mekari and wildly throwing the ball out of bounds from his own two-yard line. He landed hard on the turf and smacked his head and was taken to the locker room for evaluation.

The game was tied at half-time before Buffalo opened the third quarter with an 11-play, 66-yard drive to take a 10-3 advantage. The touchdown came with Allen connected with Diggs (eight receptions, 106 yards) from three yards out.

Buffalo’s Tyler Bass kicked a 28-yard field goal with 2:57 remaining in the first quarter and Baltimore’s Justin Tucker booted a 34-yarder with four seconds left in the half.