For all its dark tales, raw bravery of professional cycling endures

Beyond doping, etiquette of ride on, don’t look back, deal with consequences later holds 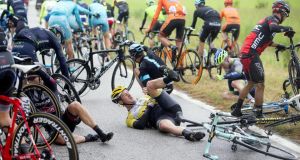 No Grand Tour has ever been won without some tale of hardship – Dutch rider Rick Flens of Team LottoNL-Jumbo after crashing during the 13th stage of the 98th Giro d’Italia yesterday. Photograph: Claudio Peri/EPA

There are six steel screws and a five-inch titanium bar where my left collarbone used to be. There’s a tiny piece of bone floating beneath my left kneecap, and a bite-like scar down the back of my right calf muscle.

“Don’t freak out,” the nurse told me, “but that’s about the worst collarbone break we’ve ever seen.” And that was 24 hours later. Because after that seemingly harmless crash on the Enniskerry Road, a few years back, I got back on my bike, cycled on home, then went to bed with a bag of ice strapped across my shoulder. Only the next day when the swelling turned purple and then a horrible black did the obvious become acceptable.

And I go cycling for the sheer pleasure of it. It’s all part of the old etiquette of the sport: ride on, don’t look back, deal with the consequences later. “Put me back on my bike,” cried Tom Simpson, after collapsing in the 1967 Tour de France, just 1.5km from the summit of Mont Ventoux. Simpson had rode himself to the point of oblivion, although what the roadside medics didn’t realise was that he’d also consumed several shots of amphetamines and brandy before the climb – a fatal combination, as it turned out, as he was pronounced dead on arrival to hospital.

Yet even accounting for the tragic extremes of Simpson – and later, in another way, of Marco Pantani – there is something enduringly fascinating about the raw hardiness of professional cycling, and for all its dark and cynical days of doping, it’s still brilliantly illuminated by the undeniable bravery of its riders. Not everyone will agree with that sentence, and if they prefer cheaper thrills and some staged diving then fair enough.

“Finally out of the hospital,” Daniele Colli tweeted on Tuesday, five days after crashing out of the Giro d’Italia, in the stage six bunch sprint finish into Castiglione della Pescaia. Colli was travelling flat out when he hit a spectator leaning over the crash barrier with his camera: the Italian rider went down hard, and anyone who hasn’t eaten in the last two hours might be okay to Google images of what happened to Colli’s left arm.

This was the same crash which knocked over Alberto Contador, who the day before, on stage five into Abtone, had taken over the leader’s maglia rosa. Contador was able to get back on his bike, clearly in some pain. It turned out the Spanish rider had dislocated his left shoulder, not particularly badly, although with more than two weeks of racing to go, he was in for some “majorly suffering,” as Seán Kelly told us from inside the Eurosport commentary box.

Now, Contador is far from squeaky clean on the doping front (he was stripped of his 2011 Giro title, after testing positive for clenbuterol, the previous summer) but there’s an undeniable bravery about him too: in last year’s Tour de France, Contador crashed on the descent from Col du Platzerwasel, on stage 10, then rode on for another 20km, before realising he’d broken his left tibia. A month later he started in the Vuelta a España, and ended up winning.

Indeed no Grand Tour has ever been won without some tale of hardship. Fausto Coppi, the Italian with the scrawny skinned cat physique, who still best personifies the heroics and tragedies of cycling, won the first Giro-Tour double in 1949 after enduring the bitter rivalry of team mate Gino Bartali; four days before the 1951 Tour Coppi saw his brother Serse killed in a fall off his bike.

Contador is also eying up a Giro-Tour double this summer, and only seven riders in the long history of cycling have ever managed that (including, touchingly, our own Stephen Roche, in 1987). Again, a harmless crash in yesterday’s stage 13 into Jesolo has dented his chances, as just over 3km from the finish, Contador was brought down, and despite his hectic recovery, is now 19 seconds behind the new man in pink, the Italian Fabio Aru. Contador must also ride this afternoon’s 59.4km time trial from Treviso to Valdobbiadene in a slightly modified position, to help minimise his shoulder pain, and then it’s straight into the mountains in not great weather – next Saturday’s penultimate stage, up the Colle delle Finestre and its compacted white dirt, certain to be pure cycling theatrics.

What has made this year’s Corsa Rosa additionally fascinating, along with the hardship, is the friendship – and nowhere was that more evident than in Tuesday’s stage 10, into Forli. Richie Porte’s puncture, 5km from the finish, couldn’t have come at a worse time, so the Team Sky rider – one of the main challengers to Contador – gladly accepted a wheel from fellow Australian Simon Clarke, even though Clark rides for the Orica-GreenEdge team.

Then, just it when it seemed Porte had minimised his losses on Contador to 47 seconds, the race organisers slapped him with a two-minute penalty, for the prohibited wheel exchange. This has been widely interpreted as being cruelly harsh yet entirely necessary, all part of the old etiquette of the sport. Indeed Porte got off lightly compared to Francesco Reda, the race leader who on Monday was thrown out of our own Rás, for “irregular assistance” from his team car, much to the disgust of the Italian.

Not that cycling’s friendship should be confused with sportsmanship, which isn’t always on the minds of all those in the peloton. Contador effectively won the 2010 Tour by attacking Andy Schleck, after his chain jammed, but in a sport where the riders risk limb or indeed life at every turn, there is an underlying and ultimately redeeming quality about much of the old etiquette of this sport. Now, I’m off for a cycle, to wonder if this redeeming quality will ever kick in for the Justin Gatlin’s of track and field.

5 Furlong set to return for Leinster against Scarlets