Fond memories of fjord fishing in the midnight sun in Norway

Angling Notes: Recalling a fishing trip to Bardufoss, close to the Arctic Circle, in 2005 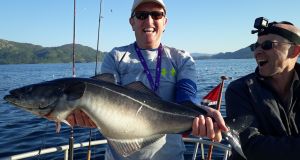 Adrian Marron with a Norway coalfish

Squalls of gusty wind made for a turbulent landing in Bardufoss Airport in Norway. Apart from a group of small airforce jets nestling on the apron, our Boeing 737 enjoyed the freedom on the tarmac. Despite our 11-strong party’s luggage of torpedo rod-tubes and fishing boxes, we sailed through customs.

Perhaps our kit revealed our purpose in the same way our green jumpers, brogues and the odd rounded belly revealed our nationality. There was great disappointment, though, when Martin’s “tackle box” containing 10 bottles of wine failed to show up.

Terry was waiting at arrivals with a convoy of transport: an eight-seater minibus, jeep with trailer and estate car. Loading proved difficult as fatigue had set in following our 12-hour journey – Dublin to Copenhagen, Olso to Bardufoss and now a 50km drive north to Kastnes.

Our eight-day stay at the Laukhaugen Farm on Onion Hill was ideal for our purpose. Standing on the crest of Animal Island and sheltered in the heart of Viking Kingdom, Laukhaugen is a magnificent 250-year-old homestead made entirely of the famous Norwegian wood.

From Laukhaugen Farm a mountain glistened with the glint of glaciers and cascading waterfalls, and we could see numerous fjords; it was a fabulous view, and I thanked God it was midsummer.

In Paula and Eric Krogstad, we had excellent hosts. Paula was born in Dublin, married Eric and moved to Norway is and now involved in the local community, helping with gourmet cooking classes and wine-tasting evenings and running an embroidery business.

Eric is a flight surgeon with the Norwegian air force and a part-time general practitioner in Bardufoss town. He served in Agfhanistan and Iraq and carried out relief work in the 2004 Indian Ocean tsunami disaster.

He proved himself a true Viking while on an errand with me to collect mussels for dinner. Having misjudged the tide, rather than concede defeat, he dived, fully clothed, into two metres of freezing water and surfaced with a bucket of large mussels from the rock-face of the fjord.

Adrenalin was high as we set off to the nearby harbour at Kastnes Hamn. Partly hidden behind a rock face within the fjord, the sleepy harbour was home to a handful of half-deckers and an old disused fish-processing plant. The newly built pontoon allowed easy access to our boats.

Pollock, redfish, ling, coalfish, wolf-fish, torsk and the ever-reliable cod made for a memorable day

We were ready for the big ones, with perks, red-tailed hawkeyes, 30lb class rods, 4/0 Penn reels and braided line. No bait required. Lifejackets compulsory. “Everyone back in harbour in time for dinner at six,” roared Terry as we ventured out into uncharted waters of the bottomless fjord.

Along with crew member Robert we relied on Michael’s knowledge of the fishing ground, as it was his fifth year at Kastnes, our first. “We’ll try a drift for coalfish to within sight of the salmon cages,” he said. Fast and furious they came. Scores of hard-fighting, fat-bellied coalfish – some to 6kg. Fantastic sport.

At the Point, fondly known as Elliott’s Peak, it was business as usual. Pollock, redfish, ling, coalfish, wolf-fish, torsk and the ever-reliable cod made for a memorable day. One unfortunate torsk failed to make it back before a golden eagle launched from high on the cliff face and gracefully scooped the fish from the water in its mighty talons.

Tired and hungry, we headed back for dinner at Laukhaugen. Typical menu comprised of cod fillet rolled in bacon, grilled whale steak, jacket potatoes and local vegetables. Fruit of the forest topped off with Irish coffee.

Taking advantage of 24-hour daylight, the brave-hearted ventured out fishing most evenings after dinner. Spinning light perks from vantage points on the fjord cliff face provided tremendous sport for cod and coalfish, some to 6kg. It was strange to fish through the sunlit night and watch dawn break at 2am.

On one occasion Paula took me to meet Torgeir Hagensen, a family friend and owner of the salmon fishery at Brandskognes, 9321 Moen, on the outskirts of Bardufoss. Hagensen’s house stood gracefully at the end of a long boreen overlooking the Malselv, a broad river of 140km.

A kayak-type boat took us upriver to a campsite and, although our time was short, it was enough to marvel at the abundance of rising fish on his 3km stretch of the river.

“Our salmon range from 2kg to 40kg and we get an excellent run of sea trout. The river is also teeming with ‘harr’ or grayling,” Hagensen said.

To put a seal of satisfaction on our Nordic adventure, Martin’s “tackle box” turned up courtesy of a special delivery by staff at Bardufoss airport – with all 10 bottles of wine intact. Just the job for our farewell gathering!

3 Function of pleadings is to define issues between parties, not to go into evidence