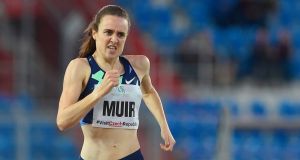 Britain’s Laura Muir on the way to winning the 800m at the IAAF Golden Spike meeting in Ostrava, Czech Republic. Photograph: Michal Cizek/AFP via Getty Images

The latest Irish record attempt for Ciara Mageean fell short at the World Athletics Continental Tour meeting in the Czech Republic city of Ostrava when she finished in fifth place in the 800 metres in a time of 2:01.40.

With victory going to Britain’s Laura Muir in a very impressive 1:58.84, the only sub-two clocking on the night, Mageean was eying her own mark of 1:59.69 set in Bern in July, the first and still only sub-two run by an Irish woman.

That looked to be on when Mageean hit the bell in close contention, passed in 58.24, before Muir opened a decisive lead, Mageean’s time still one of the fastest of her life.

Nadia Power did set a new Irish under-23 record in Rovereto, Italy running 2:01.01 and finishing third in a top class international field. Power an under-23 European medallist in 2019, smashed her previous best for 800m of 2:02.39. The Irish record of 2:01.89 by Aoife Byrne has stood since 2001. The time also moves Power to sixth in the Irish all-time list.

Sarah Healy was also in action in Ostrava and posted a 12th-place finish in a world class 1,500m, running a season best of 4:17.60, with victory going to Kenya’s Olympic champion Faith Kipyegon in 3:59.05.