Australia far too good as they regain the Ashes in Perth 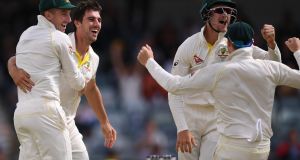 A bizarre final day of Ashes cricket at the Waca came to a close in the most predictable manner. Australia, by winning this Test by an innings and 41 runs, regained the Ashes with ruthless efficiency.

For the third time in four series down under they polished off England at the earliest opportunity. Three down with two to play never wins. England were bowled out for 218 with Dawid Malan proving the solitary obstacle for a rampaging Australian side, led on this occasion by Josh Hazlewood, who finished withfive for 48.

The oddity was that upon arrival at the ground on another day of howling winds and gusty showers there was the sight of the groundstaff kneeling on the pitch on a good length while directing five leaf blowers at half a dozen damp spots. Overnight there had been heavy rain and strong winds in Perth and somehow water had penetrated the pitch-sized undergarment, which is then covered by a massive plastic sheet.

So the start of play was delayed by three hours. A few scudding showers would have interrupted proceedings anyway but essentially the delay was caused by the attempts to dry the damp patches, which were soft enough to allow a pressed thumb to make an indentation. The Australians were ever ready to start; England sought to delay. If the roles had somehow been reversed both sides admitted they would have adopted the same stance.

After two hours a couple more industrial-sized leaf blowers were acquired, though it was hard to tell if they made any difference. Eventually the likelihood of showers receded and Hazlewood took centre stage. From the Prindiville Stand End he raced in rhythmically to become the chief tormentor of an England side as he propelled the ball unerringly towards those damp spots.

It was hard to tell whether those spots contributed to Hazlewood’s success since he was already bowling towards the end where the cracks were opening up. Of less doubt is the fact that the vagaries of the pitch were in the batsmen’s minds. Certainly they would have been in the head of Jonny Bairstow after his solitary delivery.

Bairstow pushed forward to his first ball and was bowled; he paused and stared at the pitch as if betrayed before heading back to the pavilion. Certainly the ball had kept low, though it beat the outside edge of his bat rather than going underneath it. It was a terrific first ball, though not so unplayable as the one Mitchell Starc bowled to James Vince on Sunday. Whether it hit a damp spot or a crack, the seeds of doubt had been sown.

Moeen Ali might have gone three balls later. An edge sped towards Steve Smith at second slip and the catch was claimed. There was a long, agonizing review and in all probability Moeen was saved by the soft call of “not out” by Umpire Erasmus out in the middle. Soon after another delivery from Hazlewood to Moeen jagged so far that it headed towards second slip. More seeds, more doubt.

Moeen, though steeling himself, never settled. He called for an ill-judged single and would have been run out by a yard if David Warner’s throw had hit the stumps. Then Nathan Lyon tormented him. There were two strong lbw shouts in succession and the second was successful; this was the fifth time in six innings that Lyon had dismissed Moeen. The battle of the off-spinners has not been a contest.

All the while Malan had been batting with composure, stout in defence and taking runs wherever possible but now he attempted to hook a leg side delivery from Hazlewood. A nick and the ball sailed into the gloves of Tim Paine.

The mopping up operations did not take as long in the afternoon as they did in the morning. Craig Overton, despite his cracked rib, came out looking like an elongated Michelin man; he played a couple of sweet shots before he was caught in the gully. Stuart Broad fell second ball to a Pat Cummins bouncer. Jimmy Anderson’s first delivery thudded into his helmet just to reassure everyone that the Aussies had not gone soft and at 3.45pm a stranded Chris Woakes was caught behind to allow the Australian celebrations to begin.

On the English side post-defeat rituals begin, as set in stone as carols as Christmas. After the traditional Perth defeat there will be calls for heads to roll. Scapegoats are now as essential as turkey on the 25th. Coach, captain, cricket director? Let’s have a look at the rota. Who’s turn is it to go? In fact it is not the time for that. The series may be decided; it is not over. There are two Tests to play and rest assured that the Aussies will flock to Melbourne and Sydney anticipating a cricketing coronation. The English contingent of supporters, lots of them, will plod to the stadia more wearily.

How England play in those matches will be significant. Four years ago the tour fell apart. This team is different; the personnel may not be so gifted, but they have fought much harder than their predecessors, which is highlighted by the fact that each game has finished on the fifth day.

However this is hardly a source of celebration and the bright spots have not been dazzling: Craig Overton among the bowlers has shown some promise and pluck for the future. Most obviously Malan has cemented his short-term future after two fine, gutsy innings in Perth. But the simple truth is that England have been thoroughly outgunned by a superior team, whose best players – Smith and the bowlers – were at the peak of their game when it mattered.

1 Tour de France: Every yellow jersey winner must feel guilty by some association
2 Kevin Babington: Learning to live again after life changed forever on Long Island
3 Sam Bennett: ‘A green jersey in the Tour de France is such a highlight of my career’
4 Man City agree €55m fee for Benfica’s Rúben Dias
5 Matt Williams: The sky is not falling in on Irish rugby - but Ireland do need a new plan
Real news has value SUBSCRIBE