England on the brink of series defeat at the Waca 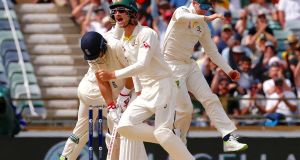 A tempestuous Sunday in Perth ended with England on the brink of surrendering the Ashes. A fierce, winter wind blew all day, which had players digging into their cases for sweaters. The candlelight carols down by the River Swan were cancelled in the morning - there was certainly no chance of any candles staying alight and there were more serious concerns that the stage and the lights would be blown away.

To the despair of England fans at the Waca, the disruption to the cricket was surprisingly brief. Sometimes there was sun, sometimes showers and always that wind howling across the ground. Amid the gales Australia inexorably tightened their grip, declaring with a lead of 259 and then making clinical incursions into England’s batting like an expert surgeon. At the close the tourists were 132-4, still 127 runs away from making Australia bat again.

Already England’s experienced men were back in the pavilion with a pair of 14s, no more use to the team than they are in pontoon. Alastair Cook’s tour, despite all the toil – but no sweat – in the nets has yet to take off, while Joe Root’s Australian expedition took another turn for the worst. Of the four batsmen dismissed Root’s departure was the most exasperating.

Perhaps the strain on the captain is telling with the expedition on the brink of failure. In his eagerness to assert himself at the crease Root chased the first delivery bowled by Nathan Lyon in the innings – the widest he has bowled in the series – and he was caught behind. He may, like Cook four years ago, be appreciating how lonely a job his can be.

Unsurprisingly the pitch looked a little livelier when the Australian bowlers took the field after resting up for the best part of two days. Mark Stoneman fell, caught behind, for his first single figure score of the series in Hazlewood’s first over. Cook clipped two leg-side boundaries and looked sharp enough until a leading edge went back down the pitch, where an inspired Hazlewood dived to his right before completing a brilliant one-handed catch.

Out came Root, steeling himself to regain the initiative. As ever he began busily, whereupon Smith summoned up Lyon on a pitch that has been no more helpful to spinners than an umbrella in a hurricane – incidentally it seems that umbrellas are the latest item to be banned from Australian cricket grounds. Lyon’s first ball was speculative, wide and on a good length, a nice sighter for the batsman, except that Root chose to drive it. The edge clipped the gloves and knee of the wicketkeeper before landing gently into the hands of a jubilant Smith at slip.

That England avoided an immediate subsidence was down to James Vince and then a plucky partnership between the first innings heroes, Dawid Malan and Jonny Bairstow. Vince batted in princely fashion with barely an error. Twelve boundaries fizzed from his bat in his 55 but then he was bowled by Starc. On this occasion Vince was blameless since he was the recipient of the ball of the series, which cut from leg to off as if delivered by Derek Underwood in his pomp but 25 mph quicker. There was absolutely no disgrace in this dismissal.

Thereafter Malan and Bairstow dug in impressively with few frills except when Malan took four authentic boundaries from an over from Pat Cummins. Despite the cracks appearing down the middle of the pitch – as is usually the case here - fluent strokeplay was still possible on this surface. Play was abandoned soon after 5pm when the heaviest shower blew over with England hoping for more of the same on the fifth day.

Oddly the fourth one began better than England could have hoped given that Australia started it on 549-4. Mitchell Marsh was lbw to Jimmy Anderson’s second delivery; then Smith after a cunning review departed in the same way as England’s premier bowler conjured a little movement from the Prindiville Stand End. The titans of Saturday were mortal after all.

Then Starc was stranded mid-pitch and Australia had lost three wickets for 12 runs. They were still 158 runs ahead but the complexion of the game had changed. Perhaps the old ball was reversing a little, which might justify not taking a new ball for an over or two. But it is hard to explain why Root and, more pertinently, his two senior bowlers, declined to take it once Tim Paine and Cummins had begun to settle.

So here was a case of England’s two senior new-ball bowlers not wishing to bowl with a new ball. There was a risk attached: the hard and shiny new ball can fly. But there was also a potential reward: the new ball against lower-order batsmen might produce the three quick wickets required to keep Australia’s lead under 200. The old guard was not prepared to take that risk. Sometimes old pro canniness can give way to negativity; sometimes Root may be required to challenge the wisdom of the old duopoly.

So the Australian pair were able to add 93 as England, with the soft old ball in their hands, settled for damage limitation rather than the pursuit of wickets. The decision to persist with the old ball was a declaration of non-intent.

After lunch Cummins became the third lbw victim for Anderson and then Lyon holed out to his third ball. Anderson remains England’s best bowler but this must have been the least satisfying four-wicket haul of his career. From the depths of 561-7 Australia were able to declare on 662-9.